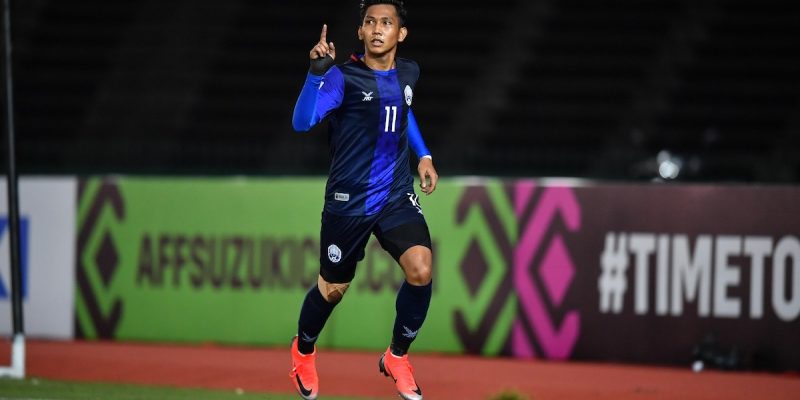 PHNOM PENH (20 Nov 2018) – After two losses, the Cambodian national team or the Koupreys finally tasted victory when they beat Laos 2-0 in a Group A tie of the AFF Suzuki Cup that was played tonight at the National Olympic Stadium.

And while Cambodia may already be out of contention for a place in the next round, still the more than 25,000 fans who attended the game were entertained with some fine attacking football from both teams.

“It was a good results and credit has to be given to the players for theur performance even though we are already out of a place in the semi-finals,” said Cambodian assistant coach Felix Dalmas.

“Of course we are disappointed that we could not make the next round but this is an on-going process and we are getting ready for the next game.”

With interest building over the last few days, there were expectations that Cambodia should at least win at home after failing to do so in their last game against the Malaysians.

And tonight, Dalmas put up his best attacking options with Chan Vathanaka in the middle and Prak Mony Oudom with Keo Sokpheng on either flanks.

While it was Laos who carved out the first real opportunity of the game with a dipping shot from Phithack Kongmathilath, it was the home team who went ahead in the 18th minute with Vathanaka heading in the cross from Oudom.

Laos tried to make a game of it after falling behind but Phithack were not well supported as they struggled to get past Cambodian captain Souey Visal manning the backline.

And in the 34th minute, Oudom converted a penalty after Laos keeper Saymanolinh Praseuth was faulted for bringing down Saret Kyra inside the box.

Just to add insult to injury, Laos head coach V. Sundramoorthy was red carded for some exchange with the fourth match official as they began second half, even under more pressure.

The Cambodians were in full control but they seem reluctant to go forward too much up until Laos broke through for their first goal of the game in the 76th minute with Somxay Keohanam breaking through down the left for a shot past two defenders.

But just a minute later, Cambodia rounded off a fine evening with their third goal of the game off a chip from Sokpheng.

The loss meant that Laos failed to pick up a single point from their four matches in the group while Cambodia will end their campaign with game against Vietnam in Hanoi in four days.

“The players were getting letahargic. We played four matches in 12 days and it was tough on us,” added Laos assistant coach Firdaus Kassim.