ASC2018: A steep curve in Hanoi for Malaysia 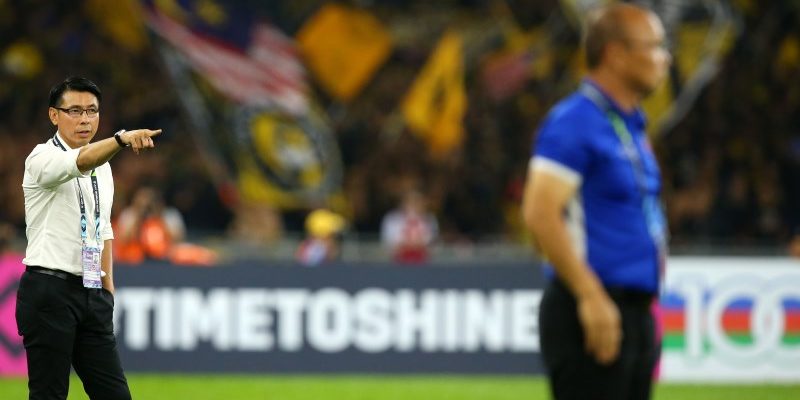 BUKIT JALIL (12 Dec 2018) – The My Dinh National Stadium in Hanoi was a bane for Malaysia in the group stage and where it will be another ‘trying’ journey for the second leg finals of the AFF Suzuki Cup this Saturday.
Malaysia and Vietnam battled to a  2-2 stalemate at the National Stadium in Bukit Jalil in the first leg finals last night, with the Harimau Malaya still very much in the race to lay their hands on the coveted Cup.
“Vietnam have been playing well for the past two years or so but i thought that we played well under the circumstances,” said Malaysian head coach Tang Cheng Hoe.
The Golden Dragons – ranked No 100 against Malaysia’s 167 – must have rued their failure to ride on the momentum after grabbing a 2-0 lead in a spate of five minutes as Harimau Malaya fought back gallantly to draw level by the hour mark.
Malaysia’s sloppy defending was a sore point in Bukit Jalil on a night when goalkeeper Farizal Marlias stood tall by stopping three other sure goals with his good reading of the game although he was beaten twice through no fault of his.
Vietnam were 1-0 up after 21 minutes after Safawi lost the ball in his own half and allowed Phan Van Duc to race through unchallenged on the left and crossed into the box.
Nguyen Huy Hung took a shot at the Malaysian goal which saw Shahrul Saad turn the ball into his own net in a desperate attempt to clear the danger. Vietnam 1-0.
Just three minutes later it was another nightmare for the Malaysian back line and Farizal was completely beaten by a rocket from Pham Duc Huy from outside the penalty box.
It would have been 3-0 for Vietnam on 31 minutes if not for Farizal who came off his line to block a one on one attempt by Ha Duc Chinh.
Harimau Malaya threw themselves a lifeline five minutes later. Syameer Kutty Abba earned himself a freekick on the left. Syameer’s delightful ball found Shahrul inside the six yard box and he finished it off with a power packed header past the towering Dang Van Lam in the Vietnam goal.
That was a confidence for the homesters and Safawi dished out something special via a freekick on the left. The Johor Darul Takzim player curled a left footed shot past the Vietnamese wall and into the far corner that left Van Lam rooted and it was 2-2 on the night.
Norshahrul Idlan Talaha had a poor game and was duly replaced by Akhyar Rashid after 70 minutes as Malaysia came charging at their opponents but simply could not find the winner.
Safawi came close in injury time but he shot straight into the safe hands of Van Lam.
It looks daunting for the Harimau Malaya but coach Tan Cheng Hoe is still optimistic of winning the cup in Hanoi.
“To draw an away game is already very good,” said Vietnam head coach Park Hang-seo. “Now, we will have another 90 minutes to play for.”