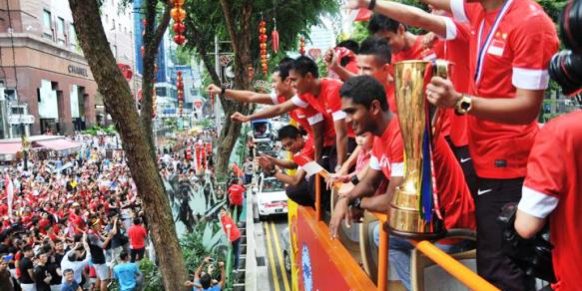 SINGAPORE (24 Dec 2012) – Four-time ASEAN champions Singapore were given a warm reception by their adoring public as fans began the celebration by waiting for them at the Changi Airport upon their arrival yesterday.

And estimated crowd of more than 500 turned up at Changi Airport’s Terminal 3 to give their footballing heroes a homecoming befitting of rock stars.

After the rousing reception, the Lions were then whisked away on an open-top bus, which took them through the heart of the city and down busy Orchard Road, much to the delight of the throngs of shoppers and foreign visitors going about their Christmas shopping. Hundreds of fans packed Orchard Road and expressed their appreciation for the players with samba dance and loud cheers.

To top it all off, the Lions then arrived at the Jalan Besar Stadium to find a packed grandstand of more than 3,000 fans, who had gathered to celebrate the record breaking fourth Asean Football Federation (AFF) title.

Led by skipper and tournament MVP Shahril Ishak and vice-captain Hariss Harun, the Lions appeared through the tunnel carrying the AFF Suzuki Cup to thunderous applause, flanked by members of the two biggest Lions fan clubs.

After thanking the fans for their support, the Lions showed their appreciation by kicking autographed balls into the stands, much to the delight of the fans.