ASC2012: Philippines Ready to Write Their Own History 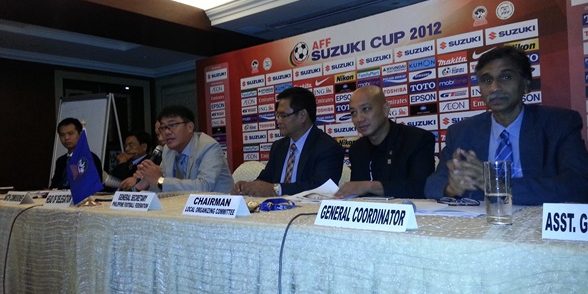 MANILA (7 Dec 2012) – If Philippines team manager Dan Palami has his way, the historical records of the AFF Suzuki Cup will have to be updated beginning with tomorrow’s match against Singapore.

While the Azkals have beaten the Lions in a previous friendly, the past records of this tournament certainly do not favour the Philippines.

And that’s what Palami wants changed. Responding to Singapore coach Raddy Avramovic’s comments that the Philippines will have to respect the Lions who are former champions, Palami said this: “Singapore is a good team and we must respect them. But tomorrow, we intend to write our own history. The team is playing well, we will be playing our second semi-finals in front of our own fans, this is a dream for us.”

“To be honest, in the last friendly with Singapore, we were lucky to get away with a 1-0 win. But in that match neither Singapore nor we had all our players available. Tomorrow will be a different game,” said Palami, adding that two more players had arrived for the match.

Angel Guirado and Dennis Cagara have received clearance from their German and Indian clubs respectively and will be ready to play tomorrow. Palami however warned that with their extra arrivals, playing Singapore would still be tough.

“We have 180 minutes of action and we have to be cautious. For the first semis, we hope to get full points here.”

Two years ago, the Philippines qualified for their first ever AFF Suzuki Cup semi-finals, however, due to the unavailability of a proper venue in the country, they had to play their home match in front of 80,000 hostile fans at the Gelora Bung Karno in Jakarta.

“This time we have 10,000 fans cheering for us, that will be a big help,” he added. According to the organisers, tickets are selling well with the grandstand seats all snapped up.