ASC2012: No Wan Zack or Shakir for Malaysia 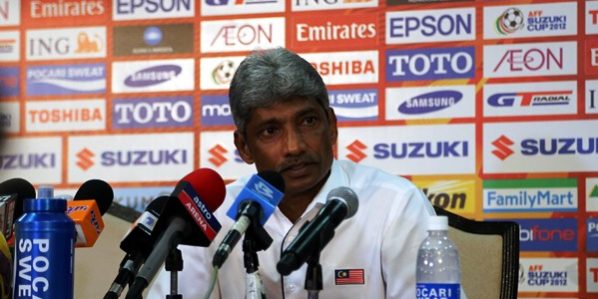 KUALA LUMPUR (8 Dec 2012) – Defending champions Malaysia have confirmed that they will be without midfielders Wan Zack Haikal Wan Nor or Shakir Shaari for their AFF Suzuki Cup first leg, semi-final clash against Thailand tomorrow night.

Datuk K. Rajagobal, the chief coach of Malaysia, said at the pre-match press conference this morning that the two players will not recover in time from their respective injuries. Wan Zack has a muscle pull while Shakir is struggling with his ankle.

“These two players will be out,” said Rajagobal. “But the rest should be there. Safee Sali? (who is down with a hamstring injury), it all depends … they will be there but I can’t say who will start the game.

“We need players to be at 100% when they are performing at this level, so we will decide on the line-up after consulting with the doctor and physiotherapist.”

While Rajagobal admitted that Thailand – the triple champions of the ASEAN crown and 13 times champions of the SEA Games – have a strong tradition in football, still he said things have changed somewhat over the past few years.

“Sure Thailand have a good tradition but over the past few years, things have changed. Certainly in the last edition in 2010,” added Rajagobal.

“The semi-final is different. We have nothing to lose where at the end of the day, we need to give a good performance and play for the people.

“Will rain have an effect on the teams? Not at all, both teams are experienced enough. The outcome of the game will depend on the situation of the match.”