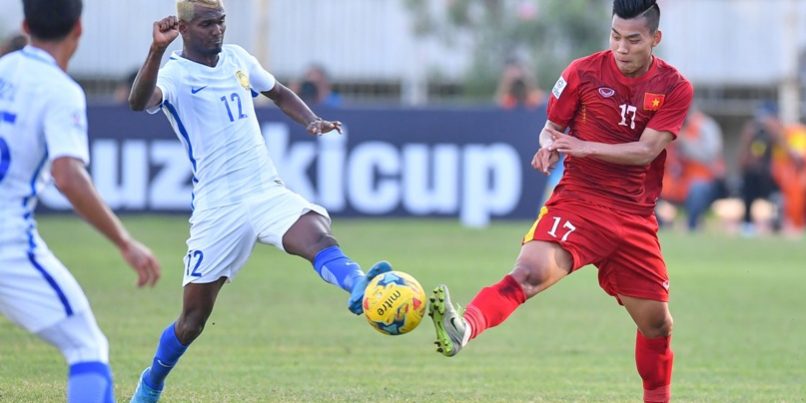 Vietnam established themselves as one of the tournament favourites in the 2016 AFF Suzuki Cup after an impressive 1-0 win over Malaysia.

A fine individual goal by Nguyen Trong Hoang with 10 minutes to go put Vietnam on course to make the semi-finals with two wins from two games in Group B.

Vietnam looked quicker and more fluid and after a tame and tactically careful first half they stepped up the tempo and had numerous chances in the second.

Malaysia did well to contain the talented Vietnam side for much of the game but in the end they were under too much pressure in a crucial match for both sides.

80’ (0-1) Nguyen Trong Hoang showed his class by beating two Malaysian defenders in the box and slotting the ball low and into the right corner, comfortably clear of Khairul Fahmi, the Malaysian keeper. The Vietnam number 8 rewarded for a fine game.

Five minutes before half-time a goal looked certain for Vietnam when Luong Xuan Truong put a perfect pass through to Nguyen Trong Hoang who sprinted down the middle and into the box. Just as he was about to get a shot in Malaysian Ronny Harun saved the day with an important tackle.

In the 42nd minute Malaysian Amri Yahyah hits a great strike from outside the box that rises over the Vietnamese crossbar, then five minutes later in retaliation Vietnam’s Luong Xuan Truong threatens the Malaysian goal with virtually the same strike.

Two minutes into the second half and Dinh Thanh Trung is put in on goal following a brilliant pass by Nguyen Trong Hoang but shoots agonisingly past the left post from close range.  It should have been Vietnam 1 Malaysia 0.

Amri Yahyah corner is met by Syazwan Zainon who is outside the box and hits a stunning volley in the 52nd minute but it is straight at Vietnam keeper Tran Nguyen Manh.

Vietnam’s Pham Thanh Luong, on as a sub, floats in a beautiful cross to his captain Le Cong Vinh who with his best chance of the game gets his head on the ball but the keeper Khairul Fahmi is just able to turn it wide.

Nguyen Trong Hoang played a neat one two with Le Cong Vinh and looked set to score but Khairul Fahmi does well to quickly come out to him and force the Vietnam player to shoot over the bar. Another great chance for Vietnam slips by in the 73rd minute.

Drama at the other end –

In the dying minutes Rizal Ghazali from far on the right launches a pin point cross into Zaquan Adha who powers in a header but it is straight at Tran Nguyen Manh.