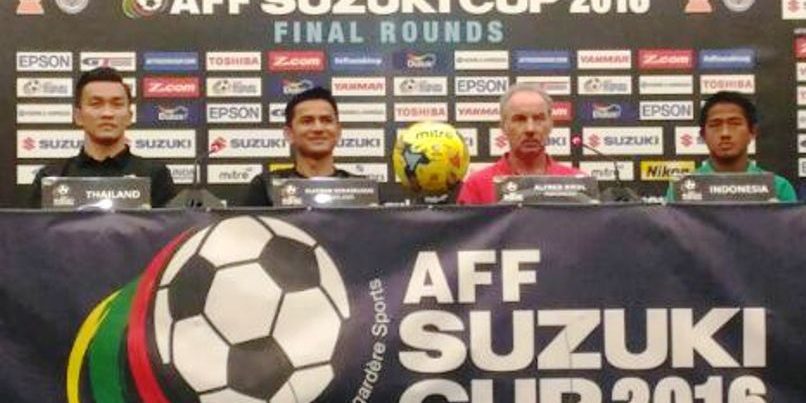 BOGOR (13 Dec 2016) – Indonesia will be itching to overturn their disastrous record of AFF Suzuki Cup final appearances. No other team, since the regional event kicked-off in 1996, has lost in every final they qualified for.

Their poor run started in 2000 when Indonesia were beaten 4-1 by Thailand in the final at the Rajamangala Stadium in Bangkok.

Indonesia went on to qualify for the next two finals, performing superbly in 2002 and 2004, only to stumble at the last hurdle to the dismay of their millions of hardcore fans.

“We are in the brink of creating history for Indonesian football and in the final, the players have every reason why they need to put in more than 100%,” said Indonesian head coach Alfred Riedl.

Thailand prevailed in the shootout in 2002 while Singapore made it three straight final losses for Indonesia in 2004.

For the record, current Thai coach, Kiatisuk Senamuang, featured in both the 2000 and 2002 tournaments. He was the MVP in 2000 and scored in the preliminary round tie against Indonesia.

In 2002, Zico would miss the opening penalty kick in the shootout but his teammates would all be on target for Thailand to walk away 4-1 winners. In 2004, Singapore would win the two-leg final 5-2.

Indonesia would have to wait six years before advancing to their fourth final. This time, however, they fell 5-1 on aggregate to Malaysia.

This year, Indonesia will be seeking to erase the bitter memories of their past four failed final appearances with a sweet victory over favourites Thailand.

But to make their dream come true, Indonesia must have the upper-hand in the first leg. Although they have proven themselves against Vietnam where they held their ground in Hanoi, it will be a different story in Bangkok.

Incidentally, Thailand have raised the coveted trophy only once in Bangkok when they won the inaugural tournament.

“We are in a very good frame of mind as the fans here really made us feel at home,” added Thai head coach Kiatisuk Senamuang.

“It will be a very difficult game in the final but we will have to be prepared for anything.”