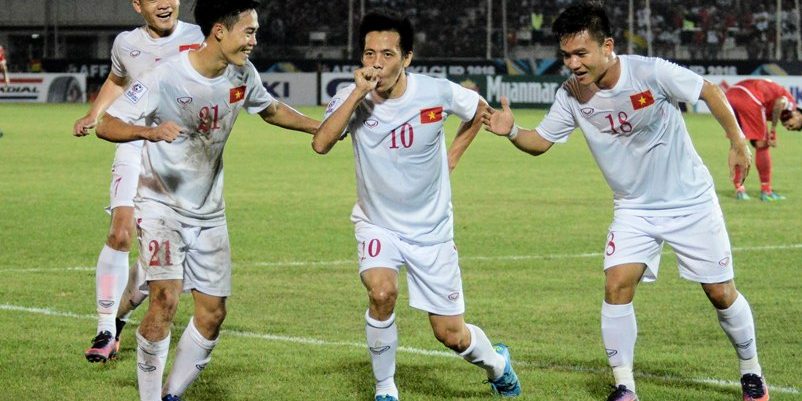 YANGON (20 Nov 2016) – Striker Le Cong Vinh showed that he is still among Asia’s best striker when he struck home the winner late in the second half to give Vietnam a hard fought 2-1 win over hosts Myanmar in Group B of the AFF Suzuki Cup 2016.

“It’s been a long time coming,” said Cong Vinh afterwards. “I’m just glad that I managed to score the winner.”

With Myanmar having trouble to get into their opponent’s box, it was Vietnam who dictated the pace and rhythm of the game as Nguyen Van Quyet pulled the action from the centre of the park.

But Myanmar stood firm to fend off the crosses as captain Yan Aung Kyaw having to assume defensive duties to continue to frustrate their opponents.

However, there was no stopping Vietnam from grabbing the lead in the 24th minute when Van Quyet won the ball from the centre of the park before firing in to beat Myanmar keeper Kyaw Zin Phyo.

Myanmar seem to be unable to get into the thick of the action until well into the second half as the introduction of Kyaw Zin Lwin gave them more pace into.

And in the 74th minute, they finally cracked open the stubborn Vietnam defence when striker Aung Thup blasted in from some 20metres out to send the more than 30,000 fans into rapturous delight.

”I told the players that this game was going to be difficult and while they played well generally, I felt that they did not concentrate as well as I would have liked them to,” added Vietnam head coach Nguyen Huu Thang.

As the fans began singing confident that they can at least grab at least a point from this game, came Cong Vinh with the killer blow.

Off a cross from the right, Cong Vinh made a fine finish of it from inside the box.

“We lost the game ourselves,” lamented Myanmar head coach Gerd Zeise. “We made things hard for ourselves in the first half. We played better in the second.”