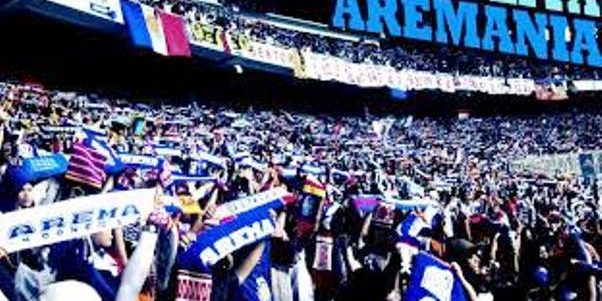 MALANG (29 Sept 2013) – Two penalties gave Arema Indonesia the crown in the Menpora Cup 2013 when the beat Central Coast Mariners 2-1 in the final that was played tonight at the Kanjuruhan Stadium.

Despite creating several early chances, it took a penalty in the 40th minute for Arema to take the lead when referee Oki Dwi Putra felt that Greg Nwokolo was faulted by Mariners’ defender Nick Montgomery inside the box.

And Keith Kayamba Gumbs did not disappoint when he sent keeper Justin Pasfield the wrong way for the first goal in the game. But with seconds left of the first half, a rifling shot from striker Marcos Flores beat Arema keeper Ahmad Kurniawan to put both teams back on level terms.

Arema continued to apply pressure into the second half and in the 52nd minute, Mariners were punished again for a hand ball and Gumbs was again on target to put Arema on the advantage.

Mariners tried hard to get back into the game but they just fell a little short of the target as Arema picked up the crown and also the USD 75,000 prize money.