All Eyes on Thailand for AFF Women’s Meet 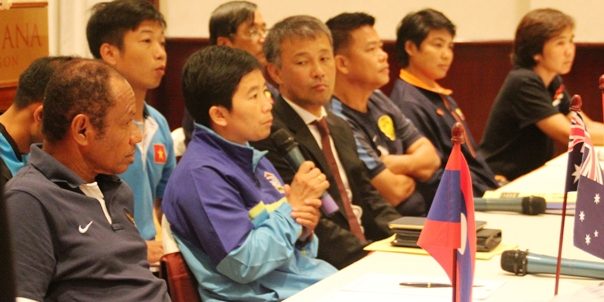 HO CHI MINH CITY (30 April 2015) – Having qualified for the FIFA Women’s World Cup later this year, Thailand will be the focus of the AFF Women’s Championship 2015 which kicks off tomorrow at the Thong Nhat Stadium.

Thai coach Nuengrutai Srathongvian said at the pre-match press conference that while the focus might be on them, they are just here to gain some valuable playing time with a focus of course on the World Cup.

“We have brought some players who may or may not make the World Cup,” said Nuengrutai. “The important factor is that we get some playing time and not focus on winning all the time.

“The World Cup is the ultimate goal, so we have to be careful on that aspect.”

With Australia – Thailand’s opponent in the opener tomorrow – refusing to attend the pre-match press conference today, Vietnam will be eager to show just how much they have changed or progressed under new coach, Takashi Norimatsu.

Norimatsu, who have had several years of experience in the J-League, was signed last month.

“Naturally, there are expectations that we should do well since we are playing at home,” said Norimatsu. “But it is also important that we treat our opponents with respect.

“We have played two matches against men’s team, so we need to look at how much of a progress we have made.”

While both Thailand and Vietnam were quite reserved in their expectations of the challenges ahead, Myanmar made it known that they are out to win the tournament outright.

“We want to win the title of course,” said Myanmar coach Thet Thet Win. “We have been in training for long periods since the last AFC qualifiers last year. So we should be in a good mindset for the crown.”

“It is good that we have this tournament. We had a Women’s Championship last year, so we managed to gather around 50 to 60 players which allowed us to bring the best here to Ho Chi Minh City. We aim to make the semi-finals.” – Indonesian coach Rully Nere, a former Indonesian international from the early 80s.

“We did not have a long preparation time. We only had a few weeks to prepare this team and considering the quality that is present here, we have to be realistic. Our target is to finish second in the group. That will be good enough for us.” – Malaysian head coach Mohd Asyraff Abdullah.

“We had about three weeks with the players. Most of the players are new, so we will have to go match by match. We are in a very tough group which means that we have to keep our expectations realistic.” – Laos coach Kovanh Namthavixay.

“It will be close. I expect that the matches in the group will be competitive. Most of the players that we have selected are from the university championship. The strength in the group is quite balanced.” – Philippines head coach Letecia Bautista.

FIXTURES – 1 May 2015
All Matches at the Thong Nhat Stadium