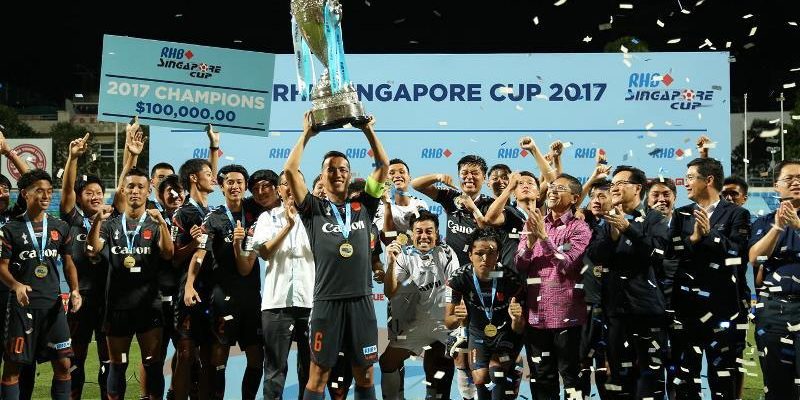 Global showed unwavering spirit by coming from behind twice, with Wesley Dos Santos scoring to cancel out Tsubasa Sano’s opener for Albirex in regulation time before Paolo Salenga did the trick again to equal Kento Nagasaki’s goal in extra time.

However, they would falter 3-1 in the resulting shootout to allow Albirex to win their third straight RHB Singapore Cup.

“We missed a lot of chances to score today and conceded two goals through set plays. These are weaknesses in my coaching ability which I have to reflect on.

“I’ve watched about 10 of Global’s PFL (Philippines Football League) games; they’re a strong team with vocal and independent players, as well as the never-say-die spirit which they showed.

“As for the penalties, I was quite calm because I thought it was a good chance for our veteran goalkeeper Nozawa to showcase his ability. Throughout the season, our players worked hard – it was through this hard work that brought us some luck.

“All in all, it’s a fantastic achievement to win all four trophies. The players and staff worked very hard for this. From now on, players may move on to other clubs, but we have enjoyed this year thoroughly together,” said Albirex Niigata (S) Head Coach Kazuaki Yoshinaga.

Interestingly, this is the first-ever Singapore Cup final which has been decided on penalties.

Albirex were largely on top in the opening exchanges and created a few good opportunities, before grabbing a deserved lead on 32 minutes.

Hotshot Sano rifled home an unerring volley into the bottom left corner, after Ryota Nakai had chested down Shuto Inaba’s lofted pass into his path.

It was almost 2-0 four minutes later, with Inaba’s 20-yard volley turned around the post by Global goalkeeper Patrick Deyto.

Akbar Nawas’ side picked up where they left off three minutes into the second half, with Brazilian defender Wesley Dos Santos heading home Minegishi’s free kick to level it at 1-1.

Albirex were then largely dominant but were unable to finish off their chances.

Inaba’s speculative 30-yarder was parried by Deyto on 66 minutes, before Great Eastern Player of the Year nominee Kento Nagasaki’s free kick from just outside the area came off the right-hand post three minutes later.

Left-back Naofumi Tanaka then lashed over a volley from a tight angle on 78 minutes, before substitute Shoichiro Sakamoto curled just wide from the edge of the box four minutes after coming on.

Global had an opportunity just before full time to win it when captain Misagh Bahadoran put Roberts through on goal, but the latter was denied by Nozawa at full stretch.

The game went into extra time, with Albirex finally retaking the lead on 95 minutes.

After Serge Kaole’s intended clearance took a ricochet off Sano, Nagasaki was left free on the edge of the box to fire a first-time shot that was deflected home by Global centre-back Marco Casambre.

Nonetheless, Global refuse to back down and duly found a second equaliser in the 109th minute with Minegishi played in another teasing free kick for Salenga to nod low past Nozawa.

Albirex centre-back Rui Kumada then saw his header from Nagasaki’s corner come off the post as the game headed into the penalty shootout.

Global would miss their first two kicks from Dos Santos and Roberts, while Albirex converted one out of two – with Sano missing after Nagasaki converted.

Albirex then fired home another two kicks Sakamoto and Tanaka, leaving it to Salenga to score to keep his side in the tie.

However, the 23-year-old’s effort was parried by Nozawa to concede the crown to the White Swans.

The result also meant Albirex retained all four pieces of domestic silverware from last season – having successfully defended the Great Eastern Community Shield, The New Paper League Cup and Great Eastern-Hyundai S.League title prior to this.

“You can see we came here to do what we had to do, so credit to the players who never gave up. We came here to play tactically differently in both halves and we did well.

“I was happy with how we defended, we didn’t give them space and were compact at the back. It shows that no wonder who the opponent is, you’ll have a chance if you’re willing to fight.

“Obviously it’s sad to lose on penalties, but I’m proud that we did to Albirex what many Singapore sides could not do this season. Now we have to focus on the PFL playoffs and finish the season well,” said Global Cebu head coach Akbar Nawas – www.sleague.com