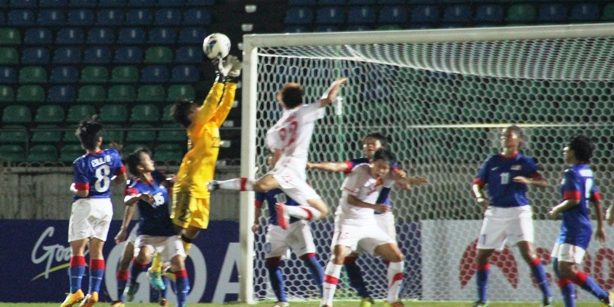 YANGON (13 Sept 2013) – It was not pretty but Malaysia certainly delivered what was expected when they conceded just a 1-0 loss to Vietnam in the second match of Group A this evening here at the Youth Training Centre.

From a side which had previously conceded at least half a dozen goals, the Malaysian girls continued on their road to football progress to deny the defending champions a bigger score line.

“Malaysia have made good progress and they defended very well,” lamented Vietnam managed Phanh Anh Tu. “We created a lot of chances against a team which was determined to defend against us. We won the points but we did not play well.”

The game itself was a log of missed chances, the ball going by open goalmouth and some frenzied defending on the part of the smaller-built Malaysians. And while they may be outsized, the Malaysians were dogged in defence to leave Vietnam to shots from outside the box.

In the first half hour alone, Vietnam hit the crossbar twice through Minh Nguyet and Tran Thi Kim Hong. It was only in the 33rd minute that Vietnam finally broke the deadlock when captain Le Thi Thuong fired in a low shot from some 20metres that went through a sea of legs before going into the Malaysian goal.

Relying more on a quick counter-attack well into the second half, Malaysia continued to deny and frustrate their more superior opponents with Minh Nguyet yet again missing out on a golden chance in the 74th minute.

Malaysia’s best effort was in the 70th minute when of quick cross from the the heart of defence from Angela Kais, lone striker Norsuriani Mazli ran the ball in only to run out of steam at the end.

“We have no choice but to play the way we did,” said Malaysian coach Jacob Joseph. “We don’t have strikers and we don’t even have capable replacements.”