AFF WOMEN’S: Two out of Two for Myanmar 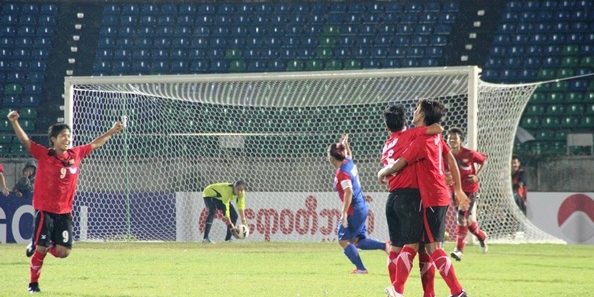 YANGON (14 Sept 2013) – Hosts Myanmar made it two wins out two in Group B when they beat the Philippines 5-1 in the AFF Aya Bank Women’s Championship this evening.

With the win, Myanmar moved up to second in the group on the same six points as leaders Japan, who had earlier pummelled Indonesia 8-0.

Just two minutes into the tie and the Philippines found themselves trailing by a goal when the failure of keeper Inna Palacios to make a save, saw a freekick from Moe Moe War floating into the far post.

The Philippines girls tried to get back into the game as quick as they could but some stout defending on the part of Shwe Sin Aung saw the several attempts from Maria Park thwarted.

And with the usual feisty Heather Cooke playing a much deeper defensive role, it was a matter of time before Myanmar went further ahead. And in the 21st minute, they did just that when Khin Moe Wai came from the left to beat Palacios for the second time in the match

Just four minutes later, Myanmar could have added goal No.3 but a chip over Palacios from Yee Yee Oo came off the crossbar instead. But in the 36th minute, there was no denying Myanmar when a cross from Than Than Htwe from the right was put into goal by Khin Moe Wai.

There was no let-up in the second half from Myanmar in spite of the three-goal advantage where just eight minutes in, they nailed their fourth goal of the game off Yee Yee Oo.

The Philippines managed to pull a goal back in the 75th minute when Joana Houplin capitalised on a defensive error to score. But that failed to spark a revival as the hosts then went on to score their fifth goal of the game from Khin Moe Wai five minutes to the end, to ensure the full points.