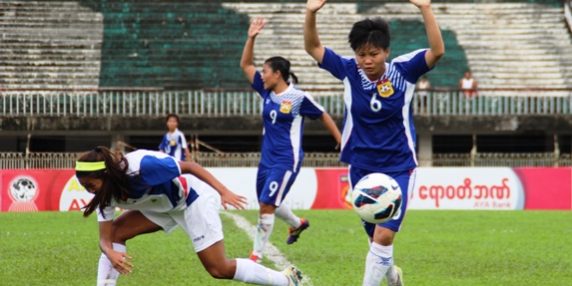 YANGON (18 Sept 2013) – Japan showed that there is no compromise to professionalism when they beat hosts Myanmar 3-0 in the final Group B match of the AFF Aya Bank Women’s Championship here at the Youth Training Centre.

With both teams already through to the next round, Japan did not pull any punches in their final group game when they scored through the duo of Hashiura Satsuki (53rd and 84th minute) and Takahashi Misyuki (86th).

The win confirmed their place as Group B winners where they will take on Vietnam in the semi-finals while runners-up Myanmar will play Australia. “We played to our tactics which was to study the opponent in the first half and then get them in the second. The girls did well today,” said Japan coach Hiroyuki Horino.

Across town at the Aung San Stadium, both Laos and the Philippines played free-flowing football to entertain the few hundred fans that had gone to watch the encounter.

Less than a minute into the tie and the Philippines took a well-deserved lead when striker Joana Houplin ran in from the right to score. Just two minutes later and she nailed goal No. 2 after beating the offside trap.

In the seventh minute, Houplin made it 3-0 when she found the back of the net off a tight angle before Laos finally woke up with the reply a minute later through a well taken free kick from Souchitta Phonharath.

Laos substitute keeper Phouth Khamsoukthavong was beaten for the fourth time in the game in the 33rd minute with Houplin again shot in from inside the box.

The change for Laos’ No. 1 Bounyong Akkhavong stemmed the tide somewhat but in the 59th minute, Natasha Alquiros punished the Laotian backline with a wicked flick as the Philippines then made it 6-1 off Chalise Baysa (25th minute) and then their final goal of the game Sunshine Soriano nine minutes to the end.

With Souchitta’s penalty in the 76th minute blocked by Philippines keeper Patricia Dull, a second penalty deep in injury time was then converted by Phonethip Sengmany.

“We tried our best but the level between Japan and us is there for all to see,” said Myanmar coach Yoshinori Kumada.

*     Teams in bold qualify for semi-finals