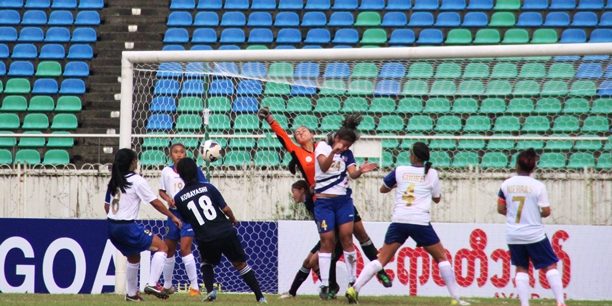 YANGON (12 Sept 2013) – A Japanese Selection side put up a slick display of attacking football when they overwhelmed the Philippines 4-1 on the second match day of Group B of the AFF Aya Bank Women’s Championship 2013 here at the Youth Training Centre.

Considering that it was their first game of the tournament this year, the Japanese girls showed none of the jitters to take a 3-0 lead at the break before scoring another in the second half.

“We have achieved our goal in this first game which was to pick up the full points,” said Japanese coach Hiroyuki Horino. “We played to our strength which was to constantly put our opponents under pressure.”

Playing under what was really an unfavourable condition with the sweltering heat beating down, the Japanese girls were the first to get on the offensive and just five minutes in, a poor clearance from Imai Haruka’s corner allowed Tanaka Mariko to place her shot beyond the reach of Philippines custodian Patricia Dull.

Through the guile of Heather Cooke, the Philippines had one player who could turn things around when she used her height and her close ball control from the centre of the park. But with the lack of a pacey striker, it was always going to be a struggle for the Philippines despite the gallant effort from Cooke and the hardworking Natasha Alquiros as well as Samatha Nierras.

But in the 20th minute, Japan went two goals up with a well taken low cross from Imai that was superbly headed into goal by Takahashi Miyuki.

And while the Philippines did come close with a swerving header from Cooke that almost caught Harada Miho on the wrong foot, it was Japan who finished the half confident with a 3-0 advantage when Hashiura Satsuki headed into an open goal following the hardwork from Imai and Takahashi.

Into the second half and the Philippines pushed harder in search of their first goal and just six minutes in, an open chance for Jilian Jamero was wasted when she sliced it wide with only Harada to beat.

Ten minutes later, a header from Maria Park off a cross from Camille Wilson narrowly missed the target as Japan then replied with their fourth goal  when an unmarked Imai blasted the ball in that came off from the under crossbar and into goal.

The Philippines finally got the goal they were looking five minutes to the end when Cooke headed in the corner from Alquiros.

“It was a brutal game in the first half with the heat slowing the girls down,” said Philippines coach Ernest Nierras afterwards. ”It was a good game for our young players and even though we lost today, we still have two more matches to play for.”