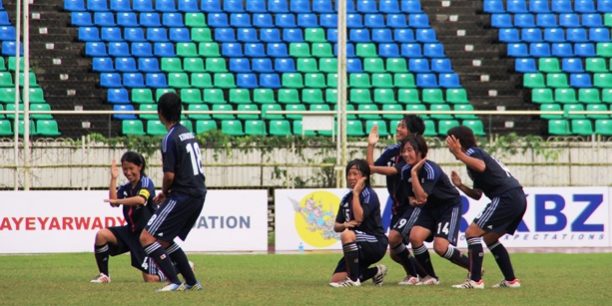 YANGON (14 Sept 2013) –  Japan Selection proved to be too strong an opponent for Indonesia when they pulverised the latter 8-0 in a Group B tie of the AFF Aya Bank Women’s Championship this afternoon at the Youth Training Centre.

The score was the biggest thus far in the competition this year which temporarily gave the Japanese girls control of the group following their back to back wins.

Playing at half pace for much of the game, Mitsuhashi Asuka grabbed a hat-trick with goals in the 45th, 47th and 68th minute as the Japanese opened account early in the 18th minute with Takahashi Miyuki nailing a brace with strikes in the 26th and 39th minute.

Komatsu Mina and Horiuchi Sayaka then scored the remaining goals in the 53rd and 90th minute respectively.