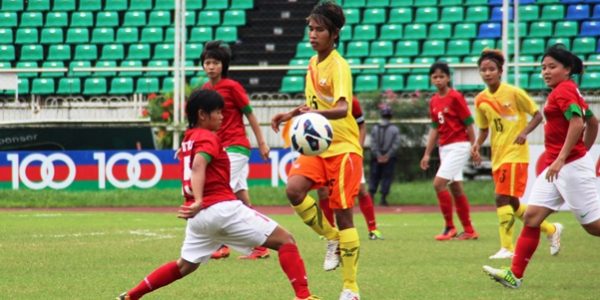 YANGON (16 Sept 2013) – Intending no disrespect to Indonesia whom they beat this afternoon with a score line of 4-0, but Myanmar are already planning for their big clash in Group B of the AFF Aya Bank Women’s Championship in two days.

In the match that was played at the Youth Training Centre, the hosts rested several key players like Nilar Myint, Khon Moe Wai and Than Than Htwe as they focus to get the better of Japan in the final game of the group.

“There was always going to be pressure in this game as Japan had scored eight goals against Indonesia. So rather than chase for the goals, I think that we have to prepare better for the final group game against Japan,” said Myanmar coach Yoshinori Kumuda.

“We rested a handful of players and that affected the team’s shape but once we brought in some of the regulars, there were more tenacity in the attack.”

With Indonesian taking a more defensive approach with the hope of stemming the onslaught, Myanmar got things going early in the 16th minute when Khin Than Wai fired in from some 25metres out.

Four minutes later, captain San San Maw then fired in a rebound from the right as Myanmar then ended the first half with a 3-0 advantage following Margret Marri’s 23rd minute effort.

The change for Yee Yee Oo and also Khin Moe Wai in the second half, gave Myanmar more pace and ideas upfront but they could only scored that one more goal through Yee Yee in the 71st minute for the final scoreline.

“For a bunch of Futsal players, I thought that we did quite well,” said Indonesian coach Israqul Subroto. “The experience here will only make this team better for the SEA Games.”