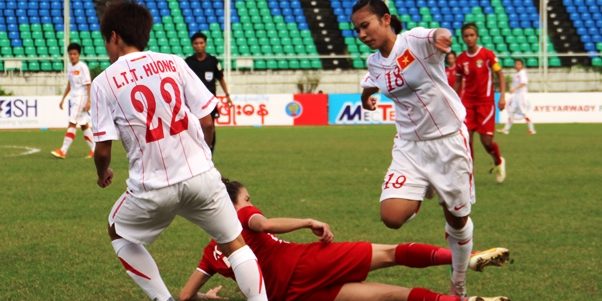 YANGON (15 Sept 2013) – Vietnam coach Chen Yun Fa was a concerned man after their 4-0 beating of Jordan this afternoon in a Group A tie of the AFF Aya Bank Women’s Championship.

Speaking after the game in which his girls put up a more determined performance than against Malaysia, Yun Fa said that goal difference will be of paramount importance in the end.

“Of course, goal difference will be very important,” said Yun Fa. “The gap between the top three teams is very close. We will of course try our very best to qualify.”

Following what was perhaps a disappointing outing against Malaysia two days ago where the Vietnamese girls only scored a paltry one goal, there was added pressure on them to pile on the goals against Jordan considering that the Australian Under-19 had scored 5-1 against the same side.

With Jordan digging in early, it took Vietnam until the 19th minute before they were able to carve the first goal when captain Le Thi Thuong fired in from some 20metrest out. Just ten minutes later, Le Thu Thanh Huong sent a grounder from the edge of the Jordanian box to put the game at 2-0 at the half.

Into the second half, Jordan tried to gain more possession at the centre of the park through speedy Shahnaz Jebreen and captain Stephanie Al Naber but the best they could muster was a dipping shot from Luna Khair in the 70th minute that was almost caught out Vietnam keeper Dang Kieu Trinh.

Just two minutes later, Vietnam stretched their lead even further when off a cross from Nguyen Thi Lieu from the right, Le Thu Thanh Huong headed the ball in before Nguyen Thi Muon completed the rout five minutes to the end.