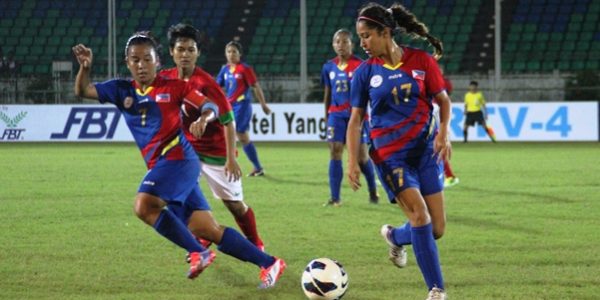 YANGON (10 Sept 2013) – It was more than can be expected from a team of Futsal players but in the end, the Indonesian girls put up a strong fight despite losing 6-0 to the Philippines in their first match in Group B of the AFF Aya Bank Women’s Championship here at the Youth Training Centre.

Playing against a team of seasoned campaigners like the Philippines which had even gone abroad for exposure, the evening was always going to be tough for Indonesia.

But in captain Maulina Novryliani and midfielder Rani Mulyasari, they had two battling players which restricted the Philippines to just that one goal in the seventh minute when Joana Houplin capitalised on a defensive lapse to score.

In fact, Indonesia had a golden chance to equalise just before the break but despite having overran her markers, Rani could only shot it straight to Philippines custodian Inna Palacios.

Two minutes after the restart and the Philippines made it 2-0 up through Olivia Schmitt as Camille Wilson then added the third goal just five minutes later.

Indonesia then clammed up their defense with Rani as the target person up front and this frustrated the Philippines even more. As Indonesia tire down, Houplin then added her second and the Philippines’ fourth in the 74th minute.

The Philippines then rounded off the evening with the fifth and sixth goal off Heather Cooke and Maria Park in the 80th and 86th minute.