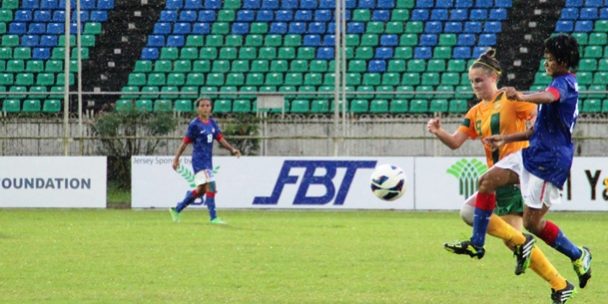 YANGON (11 Sept 2013) – Brittany Whitfield made up for her penalty miss when she scored a late in the game to give the Australian Under-19 team a hard-fought 1-0 win over Malaysia on the second matchday of Group A of the AFF Aya Bank Women’s Championship 2013 here at the Youth Training Centre.

The win was Australia’s first while for the Malaysians, it was their second loss after falling to Jordan by the same score line two days earlier.

“We just do not have a striker and also we lost out in certain aspects especially in terms of physique,” said Malaysian coach Jacob Joseph after the match. “The players were also careless at certain times of the game and this is something which we have been working hard to rectify.”

The match was a little sluggish at the start and it came close to half an hour before Australia created the first real chance in the game when Hayley Raso latched on to a cross from Sarah Carrol but Malaysian keeper Asma Junaidi was a little quick off the pace to deny her.

Malaysia finished the first half with a floater from Masturah Majid but her attempt narrowly missed the crossbar.

Australia applied more pressure into the second half and after Chloe Lagarzo missing from just outside the box, not even a penalty from Brittany in the 65th minute could change things as she shot straight to Asma.

However, Brittany made up for that mistake when she beat the offside trap to score the only goal of the game in the 76th minute with a grounder that came off the upright and into goal.

“Malaysia made things difficult for us,” said Australian coach Spencer Prior. “It was not a pretty match today but we were using a very young squad and it was important that they got this game.”