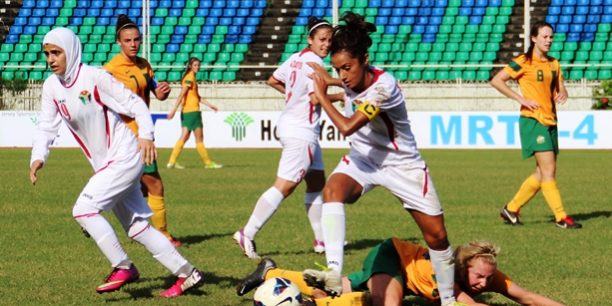 YANGON (13 Sept 2013) – Australia picked up their second win in Group A of the AFF Aya Bank Women’s Championship 2013 with a twenty minute blitz that saw them blasting Jordan to a 5-1 defeat at the Youth Training Centre.

The win has moved Australia to the top of the table albeit temporarily in Group A while Jordan remained on third at least for the moment.

“We started brightly and I thought that the first 20 minutes was some of the best football we’ve played in a long time,” said Australian coach Spencer Prior. “It was very nice to get the early goals.”

With Jordan having conceded a defeat in their last match (a 4-0 loss to Thailand), their enthusiasm did not receive the early reward when Australia scored against the run of play in the fifth minute with Amy Harrison providing the cross and striker Hayley Raso slamming the ball in.

Five minutes later, Australia picked up their second goal of the afternoon when Tara Andrews capitalised on a defensive slip-up from Jordanian defender Anfal Alsufy to beat keeper Zina Al Sadi for the second time.

Tara then grabbed her second goal of the afternoon and Australia’s third with a shot from inside the Jordan box to make it a comfortable 3-0 lead.

Shaken and certainly stirred, Jordanian captain then begun to take more control of the midfield and just two minutes later, a pass from deep centre was latched on by the speedy Shahnaz Jebreen for her to score and beat Australian keeper Mackenzie Arnold for the first time in the competition.

With a two-goal advantage at the break, Australia kept more of the possession in the second half as they finally extended their lead in the 65th minute off Hayley and then another from a well-taken free kick off captain Chloe Lagarzo.

“The players did their best even though we lost the game,” said Jordan coach Masahiko Okiyama. “It was a tough game against the Australian Under-19 team, but it was a fighting game and we are very satisfied with the experience.”