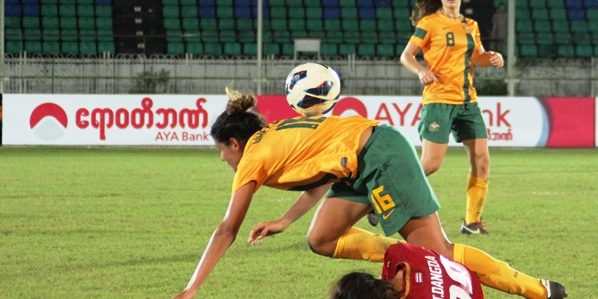 YANGON (15 Sept 2013) – Australia Under-19 booked their place in the semi-finals of the AFF Aya Bank Women’s Championship when they edged seasoned campaigner Thailand 3-2 in a crucial Group A tie this evening at the Youth Training Centre.

The win was Australia’s third after scoring a 1-0 win over Malaysia in their first group tie and then a 5-1 beating of Jordan in their second match two days ago.

With the qualification into the semi-finals realistically to be decided between by the top three teams currently filling the top three positions in the group, the win today ensured Australia a place in the final four of the championship.

The game was always going to be close between these two teams but perhaps, the sense of hesitance on the part of Thailand in going forward gave the impetus for Australia to be a little more aggressive.

With striker Sunisa Srangthaisong testing Aussie keeper MacKenzie Arnold early in the eighth minute perhaps the only highlight in the opening quarter, Australia’s patient game paid off in the 27th minute when off quick counter-attack saw a playback from Hayley Raso allowed Chloe Logarzo to slam the ball home.

Thailand were still not cajoled into action and in the 41st minute they fell further behind when Amy Harrison scored from the edge of the box. With time trickling down and the minute added time seem to be taking forever, Thailand finally grabbed the goal they were looking for off a soft grounder from Wilaiporn Boothduang that had MacKenzie in full strtch but unable to stop it getting into goal.

The Thais started brightly into the second half and just three minutes in, striker Taneekarn Dangda punished some lackaidsical Australian defending to poke the ball in as both teams went back on level terms.

With Thailand unable to make good on a 57th minute opportunity, it was Australians who grabbed their third and what was the winning goal of the game five minutes later as Hayley punished Thai custodian Waraporn Boonsing for a failed clearance.

The only blot in Australia’s victory was the sending off of coach Spencer Prior in the very last minute of play by referee Thein Thein Aye of Myanmar for dissent.