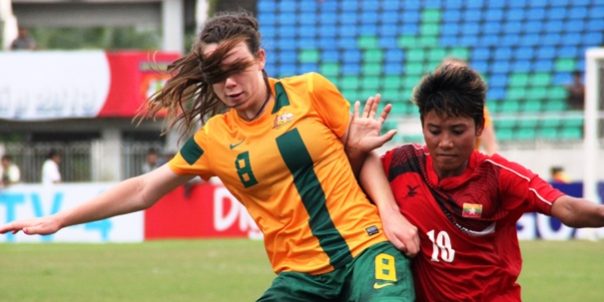 YANGON (20 Sept 2013) – It took something special from Australia and it certainly could not have come from anyone better than Georgia Yeoman to score her first goal of the competition to give her team a close 2-1 win over hosts Myanmar in the semi-finals of the AFF Aya Bank Women’s Championship here at the Youth Training Centre.

With both teams tied a goal apiece at the start of the second half, the Australians were playing the waiting game and it took just one chance in the 77th minute for Yeoman to score the winning goal to deny Myanmar’s hope of a place in their second final in two years.

“It took something special for the winning goal and I’m proud of the girls for what they showed this evening,” said Australian coach Spencer Prior.

“We managed to fight our way back from that early goal and that just showed the quality of the team we have here.”

The Australians were certainly not counting on being behind early in the game but just 45 seconds after the first whistle from Vietnam referee Mai Hoang Trang, hosts Myanmar got the best of start when Khin Moe Wai blasted in from inside the box.

But the Australians kept their cool and as they maintained their pressing game, a mistake in the Myanmar backline in the 15th minute allowed Natalie Tobin to score from 20metres out.

The game went into higher gear for much after that as the Myanmar girls tried to give the faithful 3,000 fans a reason to cheer as they drove forwards in search of the winning goal.

But all their efforts seem to be in vain as Yee Yee Oo and Naw Arlo Wer Phaw could not find the back of the net in spite of their best efforts. In their enthusiasm to push forward, it left holes in teh Myanmar backline and in the 77th minute, the nippy Brittany Whitfield ran to the left to draw the defenders out before whipping a cross that was slammed into goal by Yeoman.

“A few of our players were not playing well today and that resulted in the goals,” said Myanmar coach Yoshinori Kumada.

“But this tournament has been very good for us as we have managed to play against quality teams like Australia and Japan. It is good for our SEA Games preparation.”