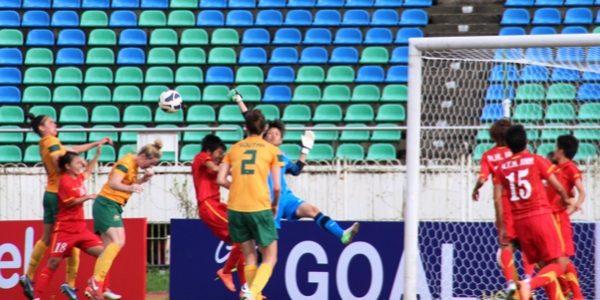 YANGON (17 Sept 2013) – Australia and Vietnam progressed into the semi-finals of the AFF Aya Bank Women’s Championship following their scoreless draw in their final Group A tie this evening at the Youth Training Centre.

After four matches, the draw gave Australia ten points and Vietnam eight points which made the thumping 6-0 win Thailand scored against Malaysia across town at the Aung San Stadium a little futile.

With seven points, the Thai girls failed to make the cut for the semi-finals first time in the history of the tournament.

The quality of the Vietnam-Australia certainly left a lot to be desired. Where even though Australia have already qualified and Vietnam needing just the one point from this tie, they should have at least considered FIFA’s call for Fair Play or at least show some sign of respect for the few fans who had actually bothered to come and watch the match.

In the meantime, three goals from Nisa Romyen drove Thailand to a well-deserved 6-0 win over basement side Malaysia.

The veteran midfielder found the back of the net in the 36th, 72nd and 74th minute as Taneekarn Dangda (57th), Wilaiporn Boothduang (28th) and Alisa Rukpinij (84th) scored the other goals.

* Teams in bold qualify for semi-finals