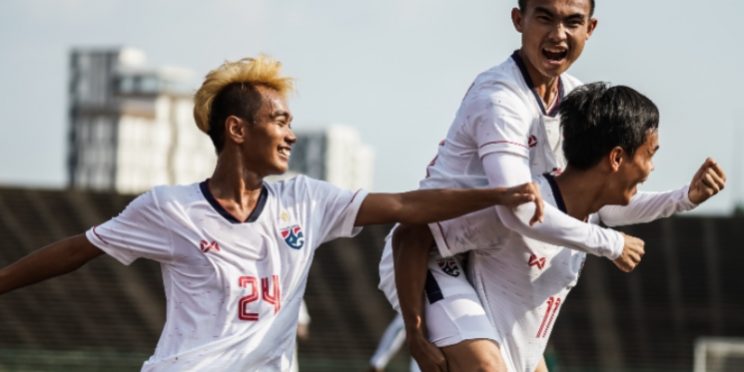 PHNOM PENH (19 Feb 2019) – Two wins out of two have given Thailand their place in the semi-finals of the AFF Under-22 LG Cup 2019 following their 3-0 win over the Philippines in a Group A this afternoon at the National Olympic Stadium here in Phnom Penh, Cambodia.

Two goals in the first half and then another after the break gave Thailand – the winner of the inaugural tournament in 2005 – the full six points from two matches played.

“It was a much better performance than what we showed in the first game (against Timor Leste),” said Jaroensak Wonggorn, the scorer of the first goal after the match. “But the heat was really intense today.”

In spite of the bearing heat, Thailand showed no signs of letting things slide as they took the early initiative to push forward.

And just three minutes into the game, the found the opener when Jaroensak beat the offside trap to fire the ball past Philippines custodian Michael Cangco Asong.

The Philippines were struggling to contain the speedy Thai forwards and they could not stop them from adding to the scoreline in the 12th minte with Kittipong Sansanit providing the cross and Jedsadakorn Kowngam nodding the ball in from close.

The Philippines finally came alive in the second half as Mark Winhoffer used his physical presence to his advantage. But with the lack of support upfront and Rico Andres lacking that precision with the crosses, it was always going to be a struggle.

The best that the Philippines could muster was a well-taken freekick from Winhoffer right at the hour mark but which came off the crossbar instead.

And seven minutes to the end, Thailand wrapped things up with their goal of the game when captain Saringkan Promsupa burst through for a stiff grounder past Asong.

“Thailand were every bit as what we expected them to be,” said captain Dimitri Limbo. “But we tried very hard to match them and I thought that we came close in the second half.”