AFF U22 LG CUP: Myanmar battle Indonesia for one point 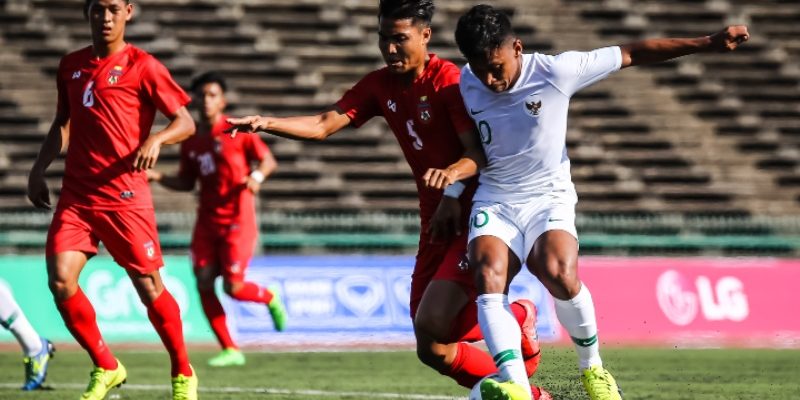 PHNOM PENH (18 Feb 2019) – The action was every bit as intense as the heat but in the end, Myanmar earned a well-deserved 1-1 draw against Indonesia in their opening game of Group B of the AFF Under-22 LG Cup 2019 here at the National Olympic Stadium in Phnom Penh, Cambodia.

A goal in each half for either team settled matters as the group remained as open as it had started.

“The result is not important. And the first match in any tournament is difficult,” said Myanmar head coach Velizar Popov. “But I am hapy with the performance where we played a high pressure game to pick up the one point.”

Either it was the weather or the fans at the stand, Indonesia struggled at the start to withstand the pressure from Myanmar.

In contrast, Myanmar were all over their opponents as they seemed eager to put the huge defeat they suffered against the same side in a friendly last year behind them.

Showing more creativity at the centre of the park, it did not take Myanmar too long to carve out the opener in the 13th minute with Myat Kaung Khant unleashing a curling shot as he made good on the hardwork off Hein Htet Aung.

With the heat not showing any signs of letting up, Myanmar continued to press their opponents but with Kaung Khant missing a grounder, it handed Indonesia the initiative.

And with just seven minutes remaining of the first half, Indonesia drew level with Rachmatrianto nodding in the corner from Gian Zola Nugraha.

The second half saw Indonesia making several positional changes but as they pushed forward in search of the winner.

Zola again provided the corner in the 55th minute but Andy Setyo Nugroho’s header went well over the crossbar.

As Myanmar began to slow down soon after, Indonesia took more control of the midfield.

But Myanmar managed to fend off the onslaught as Indonesia continued to be frustrated.

“As I had predicted, Myanmar will for sure play a pressure game. It took us a while but we managed to adapt,” said Indonesian head coach Indra Sjafri. “But we made the mistake that led to Myanmar scoring against us. We need to improve.”