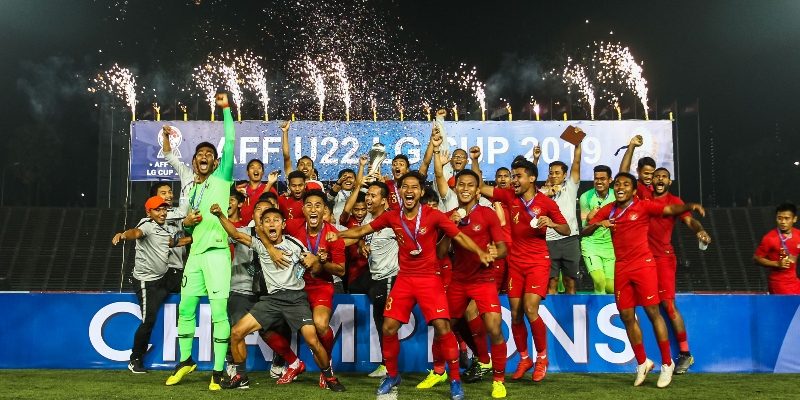 The match was worthy of a final between two organised teams but in the end, it took just seven minutes of pure attacking football to decide the outcome of a tie that was anybody’s guess.

“We fought for everything and I think that we totally deserved to win,” said Indonesian head coach Indra Sjafri afterwards. “And this win is not only for the team but also for the Indonesian people who have been thirsting for victory for such a long time.”

It was Indonesia who started the game strongly with Marinus Wawenar leading the frontline as Indonesia deployed more presence at the centre of the park.

And that agility at the centre and down the flanks gave Indonesia more mobility against the lanky Marco Ballini at the heart of the Thai defence.

Osvaldo Haay tested Thai keeper Korraphat Nareechan early in the fifth minute when he fired in the cross from Witan Sulaeman that was blocked before a melee some time later came agonisingly close.

Thailand had the hardworking Jaroensak Wonggom and Tanpisit Khukhalamo testing the Indonesian backline at the other end but neither could get the better of keeper Awan Raharj.

The score remained deadlock up until just before the hour mark before Thailand finally opened the cagey Indonesian defence with a well taken freekick in the 57th minute from Jedsadakorn Kowngam that was headed in by captain Saringkan Promsupa.

But the lead was to last just two minutes before Indonesia drew level when Sani Riski Fauzi’s shot from some 20metres came off Ballini and into goal.

Indonesia kept up the pressure and in the 64th minute, they finally took the lead for the first time in the game when Osvaldo headed in the freekick from Muhammad Luthfi Baharsyah.

Thailand pushed up a gear as they desperately went in search of the equaliser and as Indonesia defended furiously, a bad tackle on Jedsadakorn saw captain Bagas Nugroho being given the red card by Vietnam referee Nguyen Hien Triet.

But even with a man less, Indonesia were just too determined to win their first silverware of the new year as Thailand had to be content with the runners-up spot.

“We tried our best in a match that could have gone either way,” added Thailand’s Saringkan afterwards