AFF U22 LG CUP: Contrasting challenge in both groups 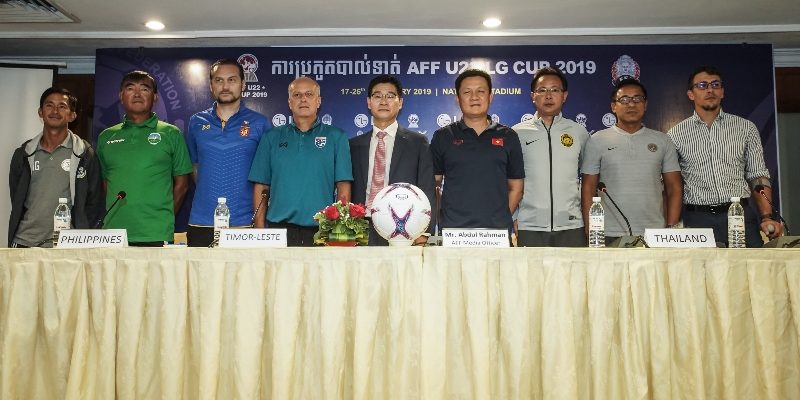 PHNOM PENH (16 Feb 2019) – It will be a contrasting challenge for teams in both groups of the AFF Under-22 LG Cup 2019 which kicks off tomorrow at the National Olympic Stadium here in Phnom Penh, Cambodia.

In what is an eagerly anticipated meet – which was last held in 2005 in Thailand with the hosts emerging victorious – the re-introduction of the tournament is key to ASEAN teams preparation for the AFC qualifiers and also the SEA Games 2019.

And while most teams stated that the absence of key players would influence outcome, still the championship is an important venue for head coaches to sift through players and assess the quality available to them.

The competition is more clear cut in Group A when compared to Group B which is considered as the proverbial Group of Death.

Group B has hosts Cambodia, alongside Malaysia, Myanmar and Indonesia.

“We are looking at growth. We have some players from the recent AFF Suzuki Cup and we look forward to playing against some great teams here,” said Cambodian head coach Felix Dalmas. “We are looking to sloe the gap against the rest of the teams from the region.

“I would like to thank the AFF for this tournament. It is an important championship as this allows us to prepare for AFC qualifiers,” said Malaysian head coach Datuk Ong Kim Swee. “Every country here has improved so it is important that we adapt.”

“I had two weeks with the players in what is a very competitive group. But it will be a very good test for us,” said Myanmar head coach Velizar Popov. “There are no excuses in football. When they are on the field, the players must perform.”

“We have brought with us the best players possible. And like what was said earlier, all teams here have improved,” said Indonesian head coach Indra Sjafri. “I believe that this is the best venue for us to preprare a squad for the AFC qualifiers and also the SEA Games.”

While it will be anybody’s game in Group B, the battle in Group A is more clear cut with Vietnam and Thailand leading the charge – and this is no disrespect to either Timor Leste or the Philippines.

Although Vietnam brought with them a very young squad, the after effect of winning the AFF Suzuki Cup 2018 would give the junior team confident while Thailand are here as the defending champions.

“Although our squad is young, I would like us to put up a strong challenge,” said Vietnam head coach Nguyen Quoc Tuan. “And while some of the regulars are not here, this will allow the others to stake their claim to the team ahead of the AFC qualifiers next month.”

“It has been a long time since the tournament was last held, so we are really appreciative of this effort as this will allow us the chance to mould a team,” said Thailand head coach Alexandre Gama. “We also have a young team with several stars unavailable. So this will be a good test.”

“We have a handful of young players who played at the recent AFF Suzuki Cup. And they will form the core of the team,” said Timor Leste head coach Norio Tsukitate. “These players will have to show their discipline to lead the younger players in the squad.

“We are using this tournament to prepare a team for the SEA Games which we will host at the end of the year,” said Philippines head coach Andres Gonzales. “It has not been an ideal preparation (prior to coming here) but we aim to be competitive.”

But while Vietnam and Thailand are the firm favourites, still in football, anything can happen and it is up to both Timor Leste and the Philippines to raise the level of their game.