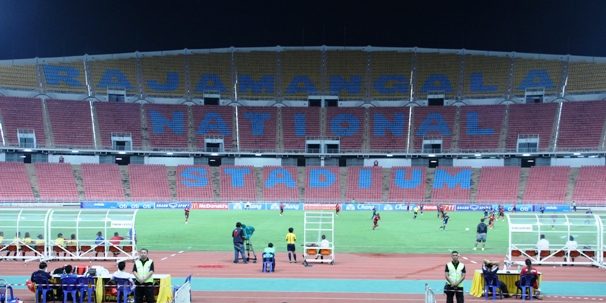 BANGKOK (16 August 2014) – Singapore pummelled Timor Leste 4-0 in the second game of the AFF Under-19 Women’s Championship this evening as they shot to the top of the standings.

On second is Thailand, who had earlier beaten Myanmar 3-0.

“It is still too soon to be impressed by the performance,” said Singapore head coach Hyrizan Jufri. “There are a lot of young players in this team, so the target is for them to get match experience more than anything else.”

For Timor Leste, it was always going to be hard going considering that they had just arrived into Bangkok, the morning of the game.

Barely 30 seconds into the game and Singapore were already in front when Nurul Khairiah Azhar lobbed the ball past Timor keeper Leonilda Soares, who was way off her line.

Three minutes later, Singapore made it a two-goal advantage when Nur Faradila Rafifi headed in from close range following a lapse in defensive duties for several Timor girls.

By the time, Singapore added the third goal in the 65th minute through Nur Faradila, the game was already over as a contest as they went on to complete the rout with the fourth goal of the game in the 78th minute off Nurul Khairiah.

“The girls were just too tired after arriving this morning,” explained Gaspar da Silva.”They tried but it was just too much against a well-prepared Singapore side. But we will be better in the next game.”

18 August 2014 (All matches at the Rajamangala Stadium)