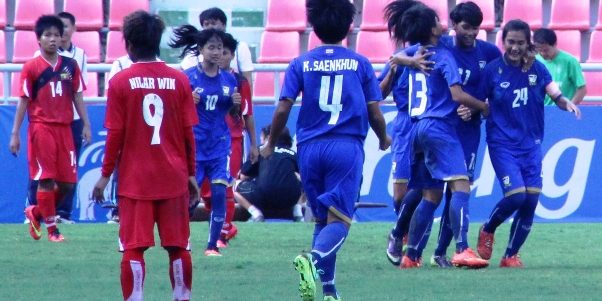 BANGKOK (16 August 2014) – Hosts Thailand got the start they were looking for when they beat Myanmar 3-0 in the opening game of the AFF Under-19 Women’s Championship this afternoon at the Rajamangala Stadium.

“It was a good start but the score line did not truly paint the right picture of the game,” said Thailand team manager Dr. Kasom Chanawongse. “Myanmar played really well but I thought that we took our chances better.”

It was Myanmar who started strongly with captain May Sabai Phoo pulling the strings from the midfield. But with the Thai defence standing firm with Kanchanaporn Saenkhun and Methawi Upapong at the heart of defence, it was not going to be easy to make the breakthrough.

A quick counter-attack in the 19th minute saw the hosts getting a corner with Sirintip Thongmai sending in a floater that was headed into goal by the unmarked Jiraporn Mongkoldee.

Myanmar’s Yu Per Khine came close with a dipping shot in the 35th minute that forced a scrambling save from Thai custodian Nattharucha Muthanawet.

With just the one-goal lead at the half, Thailand pushed harder after the restart and in the 70th minute saw them scoring goal No.2 after some sustained pressure.

Off a short pass from Sojirat Pradisorn, striker Sirintip had the all the time in the world to place the ball beyond the reach of Myanmar keeper Thandar Oo.

Jiraporn then grabbed her second and Thailand’s third right at the end, to make it a fine evening for the hosts and a perfect gift for the FIFA Women’s World Cup-bound senior Thai team watching from the stands.

“The Thai girls were just too organised,” said Myanmar chief coach Win Myint Thwin. “But we tried and we should be better for the next match.”