AFF U19 WOMEN: Second string Thais too good for Singapore 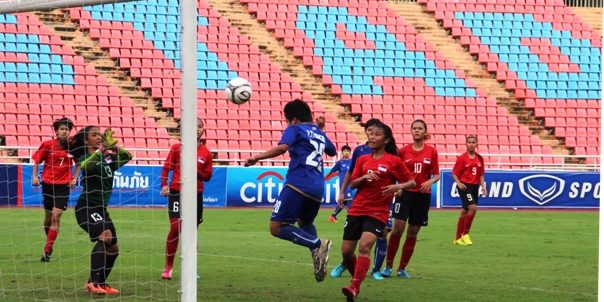 BANGKOK (24 August 2014) – A second string Thai side proved that they are still too good for Singapore when they blasted the latter 14-0 in the final round robin tie of the AFF Under-19 Women’s Championship this afternoon at the Rajamangala Stadium.

The Thais already leading the table at the start of the match, rested the likes of Sudarat Chuchuen, Jiraporn Mongkoldee and also Orawan Keereesuwannakul as they scored four goals in the first half before changing gears for the remainder in the second.

“The reserves did what was expected of them and so I have no complain,” said Thai coach Nuengrutai Srathongvian after the game.

“We rested several players and gave the others a run instead. And we scored 14 goals. So it was good. We will wait and see who we will play in the final.”

With the result already beyond contention, it was really up the hosts as to how they want to play the game today. And while Singapore resisted at the start as they caged up their backline with captain Sitianiwati manning the backline, the Thais pressed on.

The failure of Singapore keeper Nur Shahira Sulaiman to make a clean save off a shot from Oraya Sriradak in the 16th minute allowed Passanan Thong-im the easiest of tap-ins.

Singapore’s defeat was compounded further by the loss of captain Sitianiwati for a second yellow card offense late in the second half.