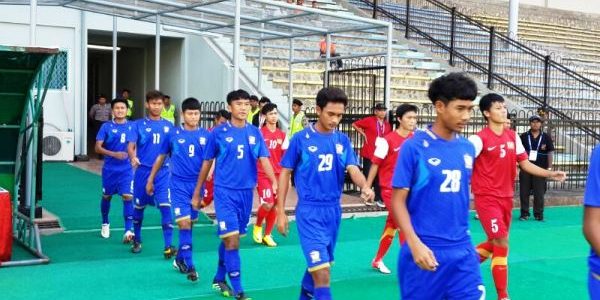 SURABAYA (10 Sept 2013) – Vietnam served up a pleasant surprise at the Petrokimia Gresik Stadium where they outplayed Thailand 3-2 in a AFF Under-19 Championship Group B clash here this afternoon.  The Vietnamese players were simply in a class of their own with their quick nippy moves that constantly caught the Thais out.

“We came here to win. This team has been together for about a month but there are 12 players here from the academy who have been playing together for six years,” said Vietnam coach Grachen Guillaume after the match.

But it was Thailand who drew first blood when Chaiyawat Buran pounced on a defensive blunder to score the opener when the game was only two minutes old. If Thailand thought they were in for an easy game, they were soon back-pedalling when the Vietnam players began to lay on the pressure.

Nguyen Cong Phuong, clearly the best player on the pitch today, weaved through the Thai defence, tapped to his teammate Nguyen Van Toan who neatly relayed the ball back for the striker to level the score.

Five minutes later, Van Toan crashed through the defence and sent Vietnam ahead for the first time. It was becoming obvious that the Vietnamese were a force to contend with, and the Thais were on the receiving end.

Cong Phuong’s antics was a constant pain to the Thai defenders and in the 27th minute, Nanthawat Kokfai, the Thai skipper, dropped him a few metres from the top of the box. Vietnam skipper Luong Xuan Truong however curled hit shot just a wee bit too much.

With a minute on the clock, Van Toan delivered a lovely pass to Cong Phuong who gave Vietnam a comfortable two-goal lead at the break.

In the first 15 minutes of the second half, Vietnam had two clear attempts but Xuan Truong and Cong Phuong both blew their chances. With time running out, Thailand upped the pace and their efforts paid off in the 85th minute when Supravee Miprathang turned in a pass from Chnrop Sampodi on the left.

Vietnam could have sealed it in the dying minutes but Lam Thi Pong’s cracker rammed into the left post while a sizzling run from Hoang Thanh Tung ended with a superb save from the Thai keeper.

In the other matches from the group, hosts Indonesia blasted Brunei 5-0 while Malaysia battled Myanmar to a 1-1 draw.