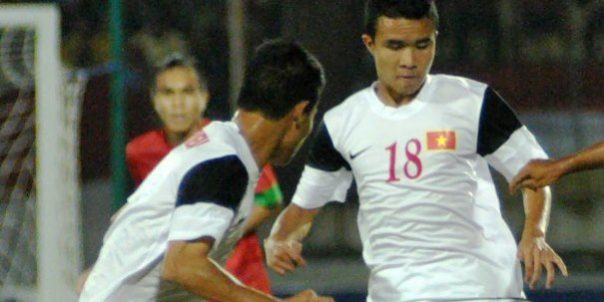 SURABAYA (16 Sept 2013) – Although already through to the semifinals, Vietnam did not ease up against Myanmar today and recorded their fourth straight win in the AFF Under-19 Championship. Striker Nguyen Van Toan turned hero when he blasted a hattrick at the Petrokimia Gresik Stadium today.

Vietnam retain their top spot in Group B with 12 points and have one game remaining against Brunei in two days. At the rate they are going, Vietnam should comfortably finish their group stage matches unbeaten.

Malaysia are second with seven points after overcoming Brunei 5-0 in another Group B match held simultaneously at Gelora Delta Sidoarjo Stadium. The Malaysians were four-goals up at the break and are now in a strong position for a semifinal berth. Indonesia are third with six points but that could change later this evening when they face Thailand.

Myanmar’s hopes of making the semifinals are very slim following today’s loss. They are fourth with as many points and will play Thailand in their last game. Even if they beat Thailand, it may not be enough to squeeze through.

Knowing very well they needed three points, Myanmar took to the field in high spirits. They did not waste time and moved forward in search of goals. And they almost surprised Vietnam in the 7th minute but Maung Maung Soe blew an excellent chance to score and boost his team’s confidence. Had that shot gone in, the whole script today may have been different. To the dismay of the bench, Aung Thu also missed the target a few minutes later.

Vietnam finally came alive and stepped up the pace. By the 15th minute, Van Toan, after a lovely 1-2 with his strike partner Ngueyn Cong Phuong that split open the defence, slammed his shot into the post but made no mistake with the rebound.

Just before the break, Van Toan raced in after a long ball and placed his shot in the far right corner. In between the goals, Myanmar had two more chances but none as good as the first.

Myanmar battled their way back when Saw Si I scored in the 65th minute. The goal fired up his teammates but despite their best efforts, their players were unable to control their shots and blew any chances they had to score.

In the dying minutes, as Myanmar were focused on hitting the equalizer, Vietnam launched a speedy counter-attack with Van Toan slipping through the defence before rounding the keeper and completing a wonderful hattrick.