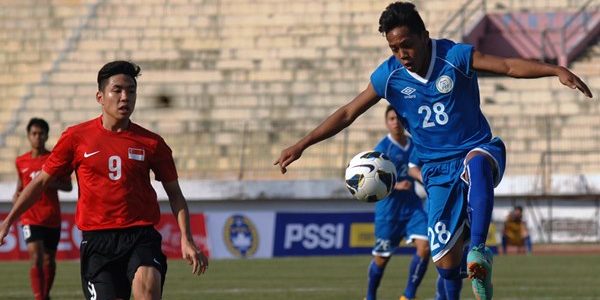 SURABAYA (11 Sept 2013) – Singapore picked up their first win of the AFF Under-19 Championship after claiming a well-earned 3-1 victory over the Philippines at the Gelora Delta Sidoarjo here today.

The young Lions, who shared points with Timor Leste in their opening Group A game two days ago, provided an improved performance to bag all three points.

Two set-pieces in the first half paved the way for Singapore’s successful run today. Mahathir Azeman and skipper Jeffery Adam Lightfoot were on target in the 29th and 44th minutes while Muhammad Hazim Faiz Hassan added a third in the 74th minute. The Philippines reduced the deficit in injury time through Nikko Benedicto.

Today’s victory propels Singapore to the top of the group, at least temporarily, with four points. But this may change as Laos, who have three points from their win over the Philippines two days ago, face Cambodia later this evening.

The first half was dominated by Singapore who were on the offense almost throughout. And their efforts paid off when they notched two goals through set-pieces in the 30th and 44th minutes. Off a freekick on the right, Brandon Koh dipped the shot into the box for Mahathir to flick Singapore ahead.

A minute from the end of the half, Singapore were awarded a freekick on the left when R. Aaravin was brought down in full flight. This time right flanker Muhammad Muhaimin pumped his shot towards skipper Jeffrey who confidently headed beyond the reach of Filipino keeper Nathaniel Vilanueva.

The Philippines, who started the match without suspended defender Amani Aguinaldo, were handed another blow when midfield general  Arnel Amita, small-built but skillful, suffered a knock on his face and had to be taken off in the 28th minute. He was replaced by Daniel Gada.

Singapore did well to hold their ground after the break. The defence and goalkeeper Mohammad Fashah Iskandar combined well to turn away attempts by the Filipinos. With the game all but over, Philippines managed to sneak one in through Nikko.

Singapore coach Dejan Gluscevic was thankful for the win although he said there was still some work to get things right. “I was happy with their performance as they stuck to our pre-game plan,’ said the coach, who added that team was made up of Under-18 and Under-17 players. Singapore only had one match to prepare before arriving in Surabaya for this tournament.

Singapore, whose victory today will go a long way in advancing, will face Laos in two days.

Philippines coach Maro Marlon Manos said that although they lost, he was pleased with his team’s performance. He was especially of their improved form in the second half.