AFF U16: No Fairy Tale Start for Hosts Myanmar 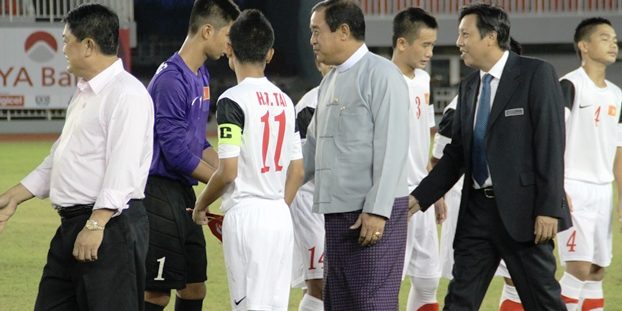 NAYPYITAW (20 Aug 2013) – Hosts Myanmar’s hope of a grand start to the AFF AYA Bank Under-16 Championship on home ground suffered a setback when they were outclassed 4-0 by Vietnam in the second game of Group A here at the Wunna Theikdi Stadium.

The Vietnamese showed their dominance with a strong attacking performance with striker Bach Hong Han nailing a hat-trick off goals in the 28th, 48th and 90th minute.

This follows the first goal of the game off a superb volley from Pham Trong Hoa which gave Vietnam the confidence to continue to stamp their dominance for the remainder of the game.

“We are just happy with the full points. Playing against the hosts was never easy but we played to the tactics which have been set,” said Dinh Van Dung, the Vietnam coach.

For Myanmar, the loss must have been a major disappointment considering that they are playing at home in a spanking new stadium. What made the loss even more difficult to swallow was the fact that Aung Phyo Thar was red carded right at the end of the tie after picking up his second yellow card of the game.