AFF U19: Myanmar top group A; Japan edge Vietnam for Group B 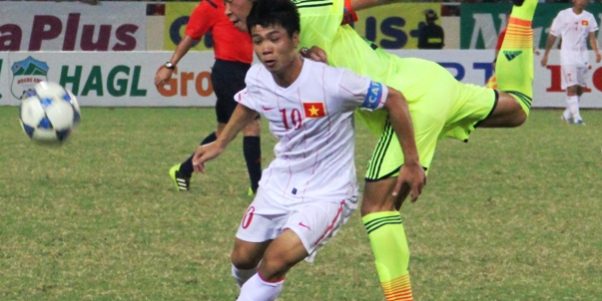 HANOI (9 Sept 2014) – As expected, Myanmar finished as Group A winners when they whitewashed Indonesia 3-0 in their second and final match in the group this afternoon here at the My Dinh National Stadium.

With the second full points, Myanmar will now take on Vietnam in the semi-finals in two days while Thailand, who emerged as Group A runners-up will take on Japan.

Indonesia, who had conceded a 6-2 loss to Thailand in their first game, were always against the odds of overcoming confident Myanmar. Not only must Indonesia win the game, they also have to do it with a healthy score line.

But Myanmar were having none of it.

Despite playing at half pace, they pressed right from the start with captain Nanda Kyaw testing Indonesian keeper Rangga Pratama in the 13th minute with a fabulous freekick that sailed over the crossbar.

And just six minutes later, a cross from Yan Naing Oo from the left was slammed into goal by the waiting Nyein Chan Aung.

In the 32nd minute, a slick play back from Mg Mg Lwin allowed Maung Maung Soe to slot the ball home.

Indonesia tried to get back into the game in the second half but it was Maung Soe who again put Myanmar further ahead with another strike from inside the box.

IN THE MEANTIME, Japan once again staged a fabulous fightback to beat hosts Vietnam 3-2 in an exhilarating final Group B tie.

In front of a sell out crowd, Vietnam gave them a reason to get on to their feet when striker Nguyen Van Toan ran in to the edge of the Japan box for a shot that had Japanese keeper Nakamura Kousuke well beaten.

But the Japanese lads maintained their focus and they did not lose shape with a double shot from Ochi Yamato and also Kaneko Shota denied by Vietnam custodian Tran Minh Toan.

Japan pressed on and in the 25th minute had an attempt from Ochi coming off the upright. With the score still to Vietnam’s advantage in the second half, Japan continue to look for the elusive equaliser.

After being denied twice through Kaneko and then Okugawa Masaya, midfielder Ideguchi Yosuke finally got the goal Japan were looking for in the 57th minute with a rifling shot from 25metres out.

Vietnam seem to have lost momentum and in the 84th minute, they fell behind for the first time in the game when Japan capitalised on a defensive lapse for Nakano Masaomi to score.

Just three minutes later, Japan made it 3-1 off a solo effort from Kaneko.

And while Vietnam might have earned a penalty right at the end which was converted by captain Nguyen Cong Phuong, it failed to re-ignite the homesters to go for draw.

“The players showed a lot of spirit,” said Japanese coach Suzuki Masakazu. “We will now prepare to do better in the semi-final.”