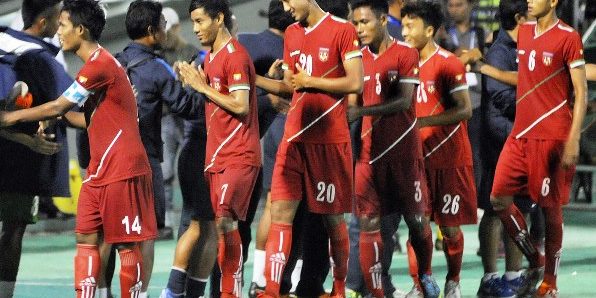 SURABAYA (14 Sept 2013) – Myanmar notched their first win of the AFF Under-19 Championship when they whipped Brunei 6-0 in a Group B at the Gelora Delta Sidoarjo this afternoon.

Myanmar, who drew with Malaysia and went down to Indonesia in their first two matches, scored three goals in each half to collect three points and keep them mathematically in the running for a place in the semis.

They have two remaining group matches against Vietnam and Thailand which they must win for any chance of advancing to the next stage. With today’s points, Myanmar are third in the standings with four points and trail behind leaders Indonesia and Vietnam who have six points each.

In today’s game, Myanmar opened the flooedgates in the fourth minute through Aung Thu. Naung Naung Latt and Si Thu Aung scored in the 35th and 45th minutes respectively to head to the the dressing room with a comfortable lead.

Nyein Chan Aung added a fourth goal in the 59th minute. Aung Thu netted his second goal of the day in the 71st minute while Maung Maung Soe wrapped up the game with a final goal in the 79th minute.

Two other Group B matches will be played out today with Thailand facing Malaysia while Vietnam takes on hosts Indonesia in the highlight clash of the day. The results of these matches are likely to affect Myanmar’s position in the standings.