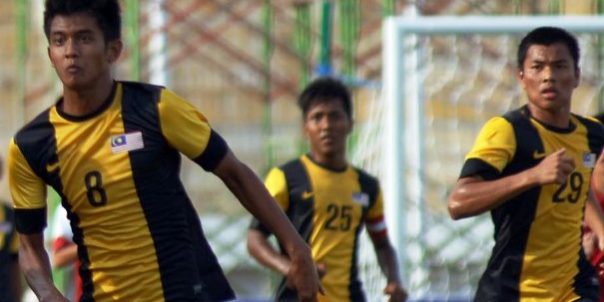 SURABAYA (16 Sept 2013) – Malaysia blasted five goal past Brunei in their penultimate Group B match here this evening to place themselves in a stronger position to advance to the semi-finals of the AFF Under-19 Championship.

Although they moved up to second place in the standings, this shift up may only be temporary as Indonesia will face Thailand later tonight. Whichever way tonight’s match turns out, Malaysia will only be sure of a place in the semi-finals after their last match against hosts Indonesia on Wednesday.

Two Group B matches were held simultaneously this evening. While Malaysia battled Brunei at the Gelora Delta Sidoarjo Stadium, Vietnam defeated Myanmar 3-1 over at the Petrokimia Gresik Stadium.

Vietnam lead the group with a maximum 12 points from four wins and are already through to the semifinals. Malaysia are second with seven points while Indonesia are third with six points. Myanmar and Thailand are next with four points each.

In tonight’s match, Malaysia got off to a flying start when Thanabalan Nadarajah headed the opening goal from a corner kick. Muhammad Arif Mohamed Anwar then added a second when he converted a penalty in the 23rd minute while Nur Shamie Iszuan Amin made it 3-0 a minute later.

Arif helped himself to another goal in the 38th minute with a steady shot from the right that sailed in although the goalkeeper managed to get his hand to it. Expectations of a another run in the second half did not materialize as Malaysia only managed to add one more through Muhammad Jafri.

Malaysia will face hosts Indonesia on Wednesday while Thailand will battle Myanmar.  Vietnam, who are already through, will face bottom-placed Brunei.