AFF U19: Malaysia edge Thais To Stay In The Running 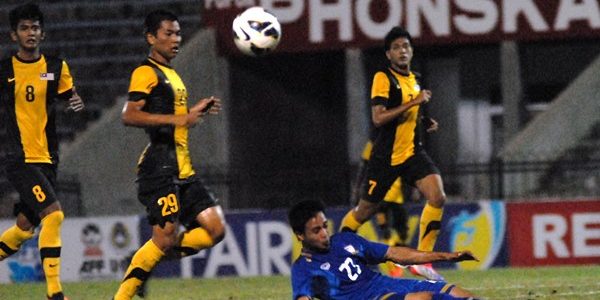 SURABAYA (14 Sept 2013) – Malaysia battled their way into contention for a spot in the AFF Under-19 Championship semifinals with a hard-fought 2-1 win over Thailand at the Petrokimia Gresik Stadium here tonight.

Muhammad Arif Mohamed Anwar sent shockwaves through the opponents’ bench with a 14th minute strike. Soon after the break, Piyapong Homkhajon scrambled home the equaliser, however, Muhammad Alif Haikal restored the lead in the 74th minute for Malaysia.

After a draw and defeat in their first two matches, Malaysia risked an early exit but the three points picked up tonight ensured they were still in with a chance. Malaysia are fourth in the standings behind group leaders Vietnam (9 pts), Indonesia (6 pts) and Myanmar (4 pts). Thailand are fifth in the group and in danger of missing the cut. Vietnam, who defeated Indonesia 2-1 in another match today at a different venue, are likely to go through to the semifinals.

Malaysia have two remaining matches against Brunei and hosts Indonesia and need to win both games if they hope to make the grade. But it will be difficult as Indonesia also need to win to stay in the hunt.

In tonight’s match, Thailand were in a mighty hurry and took off from the whistle. In the first minute, Piyapong’s strike was ruled offside, while two minutes later his volley was just off the mark. From then on, it was the Malaysians who took charge. In the 14th minute, Mohammad Arif Fadzilah rushed down the left and sent a low cross to Muhammad Alif who placed his shot in the far corner.

Malaysia continued to pressure their opponents until the break, but while they created some fine moves, they were unable to complete the finishing touches.

Thailand were awarded a freekick in the 51st minute when Muhamad Syazwan Zaipol tackled Montree Promsawat at the top of the box. Kullachat Jeentanorm hammered his shot which struck a defender and fell loose. Piyapong got to it first before the Malaysians could clear it.

In the 74th minute, Malaysia capitalised on a defensive slip-up to score the winner through Muhammad Alif.