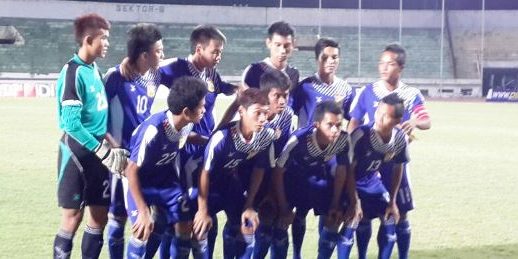 SURABAYA (11 Sept 2013) – Laos claimed their second straight win here tonight to move a step closer to the semifinals of the AFF Under-19 Championship. Star striker and captain Lembo Saysana was in his element, scoring twice in his team’s 3-1 win over Cambodia at the Gelora Delta Sidoarjo.

Lembo, quick and skillful, made his mark in the 41st minute and went on to double his tally in the 70th minute. Bounthavy Sipasong slipped in another in the 53rd minute. Lembo however will miss the next match as he picked up a second booking tonight. Cambodia, playing their first match, suffered several misses but eventually found the net in the 78th minute.

With tonight’s bounty, Laos, 3-1 winners against the Philippines two days ago, top Group A with a maximum six points. Singapore, who picked up their first win in an earlier game today, are second with four points.

Following their fancy opening victory, many had expected Laos to take charge against Cambodia. Instead, it was Cambodia who started off strong and launched into attack mode. They were soon taking shots but failed to make good their efforts.

As the game wore on, the Laos players began to pick up the pace. They were possibly still feeling a little tight after their opening game. Skipper Lembo Saysana, who had played an inspiring role in the earlier win, had a quiet start today but that did not last very long.

After lying low for the first 20 minutes or so, Lembo began to weave his magic. Latching on to a pass from Sisawad Dalavong on the left of the box, Lembo turned a defender and blasted the first goal of the game.

Soon after the break, Bounthavy found himself facing the goalkeeper and forced his shot into the roof of the net. Laos had a few more cracks but it was Lembo who was on target for the second time tonight in the 70th minute.

Laos will take on Singapore in two days and they will be aiming for a win to seal their place in the semifinals.