AFF U19: Laos Tame Young Lions to be First Team in Semis 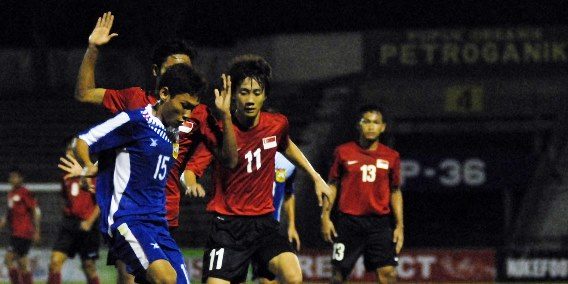 SURABAYA (13 Sept 2013) – Laos secured a third successive victory to become the first team through to the semi-finals of the AFF Under-19 Championship.

They came into the tournament as the underdogs but this evening, Laos tamed the young Lions 3-0 and will go into the last four as a strong candidate for the title.

Armisay Kettavong blasted a brace while the other goal was netted by the talented left-footed Phithack Kongmathilath. Phithack opened the scoring after only eight minutes when he slammed home a spectacular freekick.

Armisay then added the second in the 45th minute and finished off Singapore with a third in injury time.

“The players did really well, they are growing in confidence with every game. They must keep this up as we head into the next stage,” said coach Chandalaphone Liepvisay.

Laos now have nine points from three games and have one more Group A match against the Philippines. The battle for the second spot in the group will likely be between Timor Leste and Singapore, both of whom have four points each.

Timor however have the edge as they still have two more games while Singapore only has one more match remaining.

What was impressive about Laos tonight was that they played without their inspirational striker Lembo Saysana, who scored two goals so far and helped his team set up a few more. He was instrumental in the demolition of Thailand and Timor Leste in their first two games.

In his absence, his partner in attack, Phithack took the lead and steered Laos to victory. Tonight, it certainly did not take Laos very long to breach the Singapore wall of defence. Souchinda Natphasuk was set for goal when he was taken down in the eighth minute.

Phithack took his time and exquisitely curled the freekick around the wall, well beyond the reach of reserve keeper Shahul Rayyan Mohammad Redzuan.

In the 31stminute, Phithack gave Singapore another scare but his cracker of a freekick was saved by Shahul this time around. Laos continued to pile on the pressure and launched most of their attacks from the left with the nippy Soukchinda leading the fray.

In the last minute, Armisay Kettavong broke past his markers as he chased down a long cross in. As Shahul rushed out out to clear the cross, Armisay got to it a fraction earlier and coolly tipped the ball over the keeper and into goal.

Laos, with Phithack in front, had several other chances but failed to make them count. But this was mainly due to the hardworking Singapore players who battled to the end to try and keep their opponents out.

Along the way Singapore had a few whiffs at goal including from two solid strikes from Mahathir Azeman.