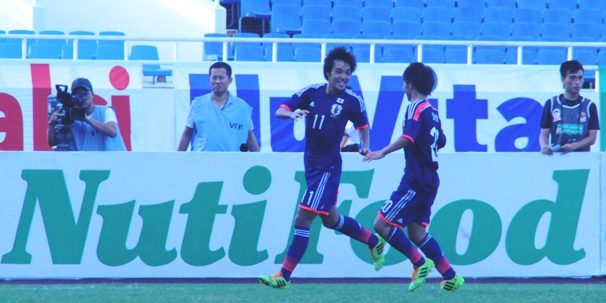 HANOI (7 Sept 2014) – The action was end to end. And in the end, Japan made the final of the AFF Nutifood Under-19 Cup when they scored right at the death to beat Australia 4-3 in the second matchday of Group B.

But while it was the Japanese who started the afternoon on a strong note with Ochi Yamato leading the frontline, it was Australia who went ahead in the 14th minute where off some hesitant Japanese defending, captain Scott Galloway burst in for a shot that had keeper Yoshimaru Kenshin well beaten.

Japan still maintained their rhythm and did not lose focus and just a minute before the break, they finally clinched their first goal of the competition when off a poor clearance, Ochi ran in with the ball before rounding off keeper Jordan Alan Brown for the equaliser.

And just when Australia thought that both teams will be on equal terms at the half, some lackadaisical defending saw Okugawa Masaya firing in past a static Australian defence for Japan to take a 2-1 lead.

Australia, who had begun the tournament on a losing note when they fell to a 1-0 loss to hosts Vietnam, started stronger into the second half and just six minutes in, Harry Ascroft headed in a corner to draw level.

The pace picked up soon after and Okugawa was again on the prowl. In the 59th minute, a brilliant solo effort saw him incising from the right and with just custodian Jordan Thurtell to beat, he fired in to the roof of the Australian goal.

With Japan doing much of the defending towards the tail end of the match, the concession of a penalty allowed Australia to once again put the game on level terms through Petro Skapetis.

But Japan did not give up and with just seconds left, a freekick allowed Takagi Kohya to deliver the winner when he pounced on a loose ball.

In the meantime, Myanmar delivered a double when they beat Thailand 2-1. At the Hassanal Bolkiah Trophy in Brunei last month, the Myanmar lads had also emerged triumphant.

And this time round, the pace was non-stop as both teams wanted to show their quality ahead of the AFC Championship in October.

With the game stalled in a deadlock at the end of the first half, it was Myanmar who finally opened account just a minute into the restart when wily striker Aung Thu broke through the Thai defence before firing past a rooted Thai keeper Rattanai Songsanchan.

In the 63rd minute, Myanmar gave their smattering fans further reason to cheer when defender Htike Htike Aung fired in a freekick from 30metres out.

Thailand pulled a late goal three minutes to the end, from Nopphon Phonkam.

But the highly entertaining match was marred by the red cards on Myanmar’s Kyaw Min Oo and Thailand’s Shinnaphat Leeaoh.