AFF U19: Indonesia Not Talking About Targets 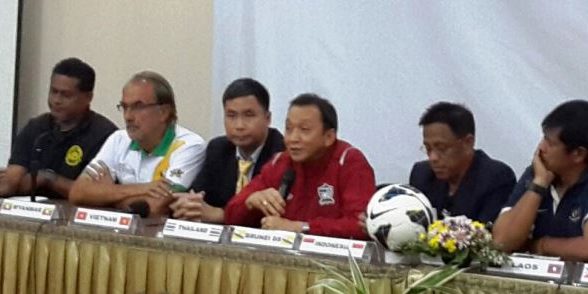 SURABAYA (8 Sept 2013) – Indonesian coach Indra Sjafri refuses to talk about specific targets or goals in the AFF Under-19 tournament here but he made it absolutely clear that his boys knew exactly what they had to do which the competition begins tomorrow.

“I was asked this question two months ago and I will say the same thing again today, we know what we have to do when the competition starts.  We are in a tough group with teams like Thailand, Vietnam, Malaysia, Singapore and others all vying for honours here,” said Indra (pix) at the Press Conference after today’s team manager’s meeting here today.

He was responding to a question from the Indonesian media on his team’s targets.

He went on to comment: “Some of the teams may say that they have young and new players and are here to try their best, but no coach will come here without having intentions of being successful. We’ve not won this tournament in fact it’s been a while since we have won anything.”

Indonesia’s pressure increased following the Under-16 team’s loss to Malaysia in the AFF Under-16 final last week in Myanmar.

Indonesia have a long road ahead of them and it will be difficult as many of the teams here have had good preparations coming into this tournament. Cambodia have been preparing for the past three months and were based in Malaysia in their last week of training.

Singapore were in UAE and France while their arch rivals to the north Malaysia were in Europe for more than two months. Even Timor Leste and Myanmar headed abroad for stints in South Korea and China respectively.

“We took time to prepare for this event. It is a huge challenge for us but you can be sure we will do our best for Thailand and the Thai people.”

In short, almost all of the teams here are well if not reasonably prepared and it could really go any which way.