AFF U19: Indonesia are Champions after Winning Sudden-Death Shoot Out 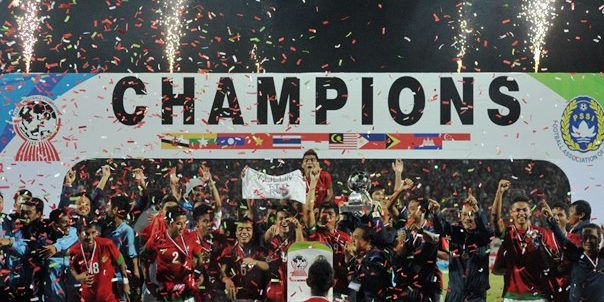 SURABAYA (22 Sept 2013) – Ilham Udin Armaiyn blasted the winner in the sudden death penalty shootout against Vietnam here tonight to hand Indonesia the prestigious AFF Under-19 Championship for the first time in the history of the tournament. After an intense 120-minute battle, Indonesia maintained their composure to defeat Vietnam 7-6 in thrilling shootout.

After Vietnam’s Pham Duc Huy missed his spot kick, Ilham knew it was up to him to deliver the trophy to his country. The striker took his time and sent a low shot to the right, for brief moment there were some sighs when his kick hit the right post.  But when the ball turned in, the jam-packed stadium of 35,000 fans erupted into a might roar that lasted for a long while.

For Indonesia, this is their first win in this tournament since it was introduced in 2005. The victory was also a long-awaited win for Indonesia who have not won a major title for over 20 years. It was hardly surprising that some fans could not hold back their tears as they watched their team celebrate.

Tonight’s match was furiously fought out throughout the 90 minutes which ended scoreless. The following 30 minutes of extra time also the players from both sides throwing everything they had into the game as they went on the hunt for the elusive goal.

The goal never came and the game was forced into the dreaded shootout. After the mandatory five kicks the score was tied at 3-3. A further four kicks were required before the winner was installed.

Earlier in the first half, Vietnam had a setback when Pham Trum Tinh had to be replaced after an attack on the Indonesian goal. As he went down, he appeared to have been struck by a defender and suffered an injury just above his right eye. He was carried off bleeding and was then sent to the hospital.

Phan Thanh Hau, who had come on for Trum Tinh, almost immediately had a crack at goal but his shot was caught by Ravi Murdianto. A few minutes later, Trum Tinh’s freekick just missed a diving Le Van Son. A few minutes on, Vietnam were again on their opponents door but striker Nguyen Cong Phuong’s solid strike was saved.

Indonesia had a whiff at goal on the half hour mark, however Muchlis Hadi’s crack was saved by Le Van Truong. Vietnam’s closest shot was just before the break. To their dismay, Pham Duc Huy’s sizzler was pushed away by Ravi. Cong Phuong blasted the rebound but it came off the crossbar.

Like the first half, Vietnam dictated much of the play but the hardworking Indonesia defence with Ravi between the posts, turned away every attack. Indonesia broke away when they could and had a few close calls themselves.  But as the game progressed it was clear the game would go into extratime.

PAST WINNERS OF THE AFF UNDER-19 CHAMPIONSHIP