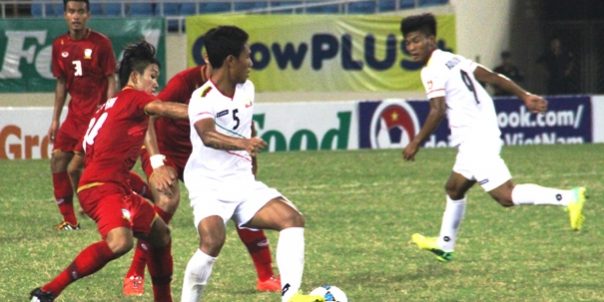 HANOI (8 Sept 2014) – Myanmar assistant coach Nyi Nyi Latt said that the main difference between the current Under-19 team as compared to previous squad is that the current batch has more heart and soul.

The team which had just recently won the Hassanal Bolkiah Trophy 2014 when they beat Vietnam in the final, scored their first win in the AFF Nutifood Under-19 Cup when they beat powerhouse Thailand 2-1 on the second match day of Group A.

“These players have a lot of heart and a lot of soul. They play for the country,” said Nyi Latt after the match. “You can see from the way they play that they just want honour for Myanmar.

“And it is for this reason that they are doing well at the moment. As long as we can keep instilling this type of discipline on the players, they will be successful.

“Winning and losing in football is part of the game. But it is important that you have the right approach.”

Myanmar, who will be hosting the AFC U19 Youth Championship in October, are eager to showcase their prowess in the region. And they have certainly grown from strength to strength with quality players like Aung Thu and Nanda Kyaw.

Asked if the team will be going all out to pile on the goals on Indonesia – who had conceded a 6-2 defeat to Thailand in the first game – Nyi Latt said that it is not as important as winning the three points.

“We just want to win. It does not matter by how many goals,” he quipped.