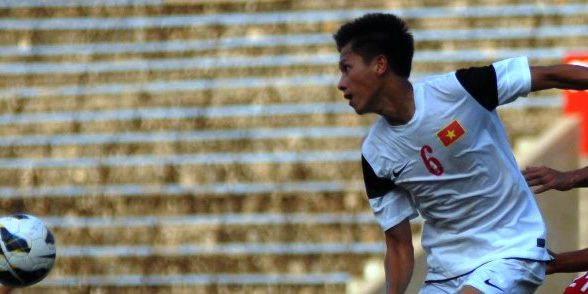 SURABAYA (20 Sept 2013) – Vietnam claimed their place in the final of the AFF Under-19 Championship after star striker Nguyen Cong Phuong struck the only goal against Laos at the Petrokimia Gresik Stadium this evening. In a closely contested battle which could have gone either way, Cong Phuong took his chances well to slot in the winner in the 75th minute.

Vietnam will face the winner of the other semifinal match between hosts Indonesia and Timor Leste at the Gelora Delta Stadium later tonight.

Laos, who started the game without their injured ace striker and livewire Lembo Saysana, had their chances but were unable to get their shots into goal. Laos coach Chandalaphone Liepvisay must have missed Lembo each time he watched his boys miss the target.

Vietnam, who are capable of playing far better as proven in their previous matches, had a slow start today, probably because they were a little nervous. But once they got over that, they began to launch some serious moves.

But it was not until the 75th minute that Vietnam finally broke through. Cong Phuong picked up a pass from Nguyen Van Toan in the centre, sped down the left and blasted home the winner.

Athough without Lembo leading the show, Laos forged a good attack in front and troubled the Vietnamese. Striker Phithack Kongmathilath  along with Soukchinda Natphasour were a constant bother to their rivals. They had attempts in the seventh, 13th and 18th minutes, but failed to convert.

In the 25th minute, Laos should have scored but Jo E Sandara’s header from a solid cross from Phithack was just off the mark. Two minutes later, Vietnam finally had their first crack to score. Nguyen Van Toan twisted and turned in the box and released unmarked Nguyen Tuan Anh on the right but he blew the shot.

Soon after Hoang Thanh Tung rounded the defence but watched in despair as his shot swept to the right.

In the 68th minute, referee Steve Asistido blew when Laos goalkeeper Soukthavy Soundala took too much time to kick the ball. Laos coach Chandalaphone contested the decision and was sent to the stands.

After the goal, Laos continued to pressure and launched numerous attacks but were unable to knock in the equaliser.