AFF U19: Chance for Vietnam to set record straight 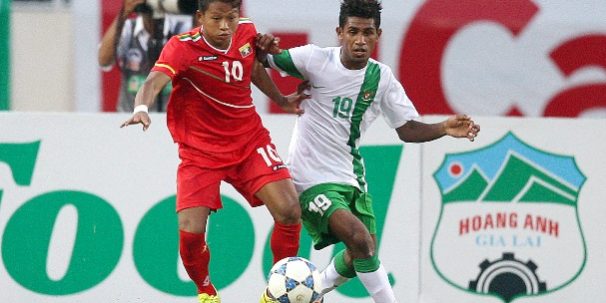 HANOI (10 Sept 2014) – After losing to Myanmar in the final of the Hassanal Bolkiah Trophy last month, Vietnam will have a chance to set the record straight in the semi-finals of the AFF Nutifood Cup tomorrow.

Coach Graechen Guillaume said at the post-match press conference following the team’s 3-2 loss to Japan in their final tie in Group B last night that the team still have plenty of fight left in them for the remainder of their campaign.

“We got a great start against Japan but somehow, we lost the rhythm and we conceded the goals,” said the Frenchman “It is always disappointing to lose but I believe that we still have plenty of fight left in us.

“We will have to prepare well against Myanmar, whom we know very well. We will be gunning for a different outcome this time round.”

For Myanmar, they will be looking to play their usual match and is unlikely to put a shackle on Vietnam star striker and captain Nguyen Cong Phuong. Assistant coach Nyi Nyi Latt said that with young players, it is the state of mind which is so very important.

“We did not play our usual game against Indonesia as the players seem to be taking it a little easy,” added Nyi Latt. “That is the problem with young players. They need more consistency.

“But I expect them to bring their game to the next match against Vietnam. It will be another hard game for sure and we will be putting our best attacking display on show.”

In the other semi-finals, Japan will be taking on Thailand, who have yet to showcase their best in the competition.

For Japan, they have showed that they are a resilient side. They have fallen behind twice in their first two matches but they always staged a magnificent comeback to win both games.

They bested Australia 4-3 in their first game before edging hosts Vietnam in front of their sellout crowd last night 3-2.

“The players have been fabulous,” added Japan coach Suzuki Masakazu.

“We will still be approaching the semi-finals very much in the same manner which we have done in all the group matches. Nothing changes.”

Thailand on the other hand, who has had three full days of rest, will be full of vigour for the Japan tie.

“We are working on a couple of things obviously. We have to be at our best against the Japanese,” said Thai coach Sasom Pobprasert.