AFF U16: Bandiera on the Double for Australia 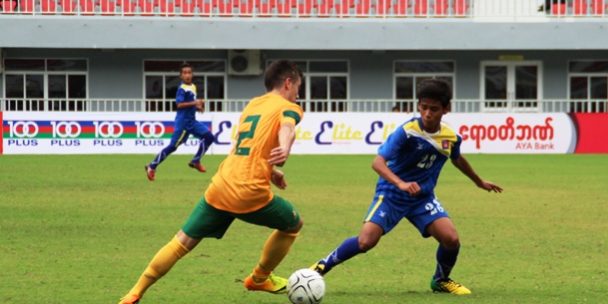 NAYPYITAW (20 Aug 2013) – Jackson Bandiera hit a double as Australia romped to a comfortable 4-0 win over Cambodia in the opening Group A match of the AFF AYA Bank U16 Championship this afternoon at the Wunna Theikdi Stadium.

Bandiera opened account early in the 4th minute before adding the other in the 34th minute as Jamie Dimitroff scored one in between in the 15th minute. Daniel Maskins then completed the rout with the fourth goal of the game in the 82nd minute.

“I was happy with the performance in the first half. The second could have been a lot better,” said Australian coach Antony Vidmar after the match. “But we are satisfied with the result considering that it was the first game of the tournament.”

In the meantime, Cambodian coach Samuel Schweingruber realised that it was always going to be a tough afternoon.

“We were outplayed physically but we also made several mistakes which we should not have at this level,” added Shweingruber.