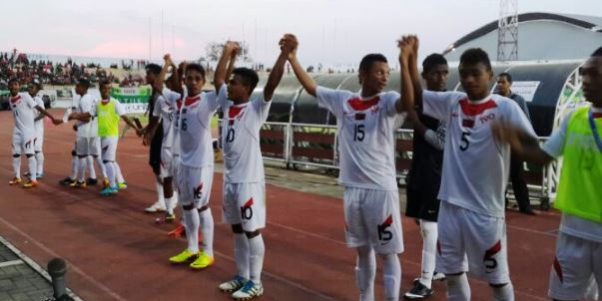 SURABAYA (22 Sept 2013) – Adelino de Oliveira hammered a superb hattrick against Laos this evening to ensure Timor Leste finished third in the AFF Under-19 Championship. Timor Leste battled back from a being a goal down to defeat Laos 4-2 at the Gelora Delta Sidoarjo today.

The skillful Adelino landed two quick strikes in the dying minutes of the first half to erase the lead taken by Laos through dead ball specialist Phithack Kongmathilath. Adelino added his third goal of the third-fourth playoff in the 58th minute before teammate and skipper Nataniel Reis sealed the victory in added time.

For Timor Leste, the manner in which they won today was similar to their earlier group match where they also came back from a goal down to beat Laos.  In that crucial group tie, Timor Leste won 3-1 to finish as the group winners.

This evening’s playoff game had a slow start but Laos, who were without suspended coach Chandalaphone Liepvisay, eventually grabbed the lead through Phithack in the 29th minute. Laos was awarded a freekick on the right when Henrique Martins brought down Phoutthasay Khochalern. Phithack stepped up and sent a sizzler that curled in perfectly at the near post.

Laos had a few good attempts but it was the two well-struck drives by Souksavanh Somsanith on the right which should have extended their lead. But it was not to be as goalkeeper Fagio Pereira was on full alert and made two excellent saves.

Timor had a rather quiet game but finally stirred to life in the dying minutes when the nippy Adelino scored two quick goals in the 45th minutes in added time. Adelino delivered a fine goal in the 58th minute when he took on the defence, rounded the keeper and popped in his third goal.

Laos refused to give up and found themselves back in contention in the 68th minute from a Souksavanh strike. But Nataniel restored the lead during a quick counter attack to put the game beyond Laos.