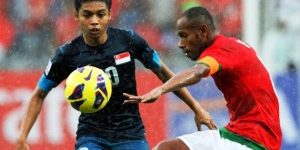 VIENTIANE (8 July 2011) – Cambodia claimed a hard-fought victory when they edged the Philippines 2-1 in the opening Group B match of the AFF Under-16 Championship at the National Sports Complex here this evening. Striker Nub Tola was in excellent form as he blasted both goals to deliver three important psychological points to his team in this tournament.

With a win in hand today, the pressure would have eased on Cambodia as they prepare to face the other rivals in the group – Singapore, Vietnam and Myanmar.

The Philippines will now have to make amends in their remaining preliminary matches if they hope to advance to the next stage. Their hopes however suffered a crushing blow when striker Ryu Nell Fegidero was sent off in the dying minutes.

“The first half was better than the second after we took out the regulars. There are certain improvements which we need to work on especially in the passing and evading markers,” said Daisuke Yoshikoa, the chief coach for Cambodia.

“But winning is always good.”

It was a great start for Cambodia as they broke through after just seven minutes. The Filipinos were barely warmed up when Nub Tola blasted his side ahead. In one of their first moves forward, the Cambodians attacked from the right with Nub scoring off a header from Firo Fi In.

The Philippines were not affected by the early strike and launched right back into attack mode. Their efforts paid off within four minutes when Fegidero scambled in a close range shot.

Cambodia were soon ahead again, in the 20th minute. Nub proved to be the spoiler again with a well taken shot to provide his team a slim lead going into the break.

Nub proved to be a thorn in the Philippines side as he constantly took shots, including some superb long range strikes, in the last few minutes of the half. He had two clear misses, from the top of the box in the 31st minute and a header in 37th minute.

Cambodia, led by Nub and Firo, continued to pressure after the break. The Filipinos however were better armed and did well to keep the Cambodian strikers out.

Despite their untiring efforts, Philippines were unable to claim the equaliser. In the dying minutes, goal-scorer Fegidero picked up a second booking and was sent off.